For the first time since June 1966 the TARDIS has arrived in present-day Britain – and the series has never looked more like a VT episode of The Avengers. This isn’t entirely surprising given it’s the first Doctor Who script by former Avengers writer Malcolm Hulke. Barring the Christmas run-in with the police in The Feast of Steven, it’s the first time the Doctor has had to properly contend with British officialdom (having worked comfortably alongside them in The War Machines) and watching it feels like a sudden premonition of the imminent UNIT years.

That’s reinforced by the unusually liberal use of location filming, which looks great, and really helps to sell the contemporary feel of the story. The opening shot – cutting from an aircraft to the TARDIS arriving on a runway, the crew exiting, noticing the approaching plane, and legging it across the tarmac – is excellent. What might have been achieved by mixing stock footage with some close up studio recording of the crew reacting therefore looks expansive and expensive. 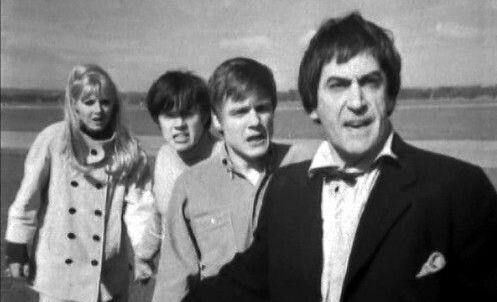 It’s also pretty much the last moment we see this TARDIS team together. They’re immediately split up, which means, surprisingly, given it’s this era’s iconic duo, that 17 weeks in, Jamie and the Doctor are paired for the first time (it was Jamie and Ben in The Highlanders and The Underwater Menace, Jamie and Polly in The Macra Terror, and Jamie and the sick bed for most of The Moonbase). It’s not difficult to see why they’ve become so well regarded: they’re an excellent double act – Jamie blabbing about the TARDIS to an officious immigration officer while the Doctor elbows him in the ribs to keep him quiet is the standout scene of the episode.

Meanwhile, Ben wanders around the airport looking for the way out, which almost feels like a cruel joke at Michael Craze’s expense. At least Anneke Wills gets to be the conduit for most of the plot – as Polly witnesses an assassination, gets kidnapped and then denies ever having met the Doctor and Jamie. It’s a fantastic moment in an episode that very effectively sets up a lot of mystery and danger: what’s happened to Polly? Why was the man in the hangar killed? And what is the hideously deformed creature that the sinister airmen lead into hospital? One thing seems certain – it’s not ‘students’ doing a practical joke as Jean Rock, pre-empting Rose Tyler by 38 years, seems to think.

Next episode: The Faceless Ones – Episode 2