On the one hand the direction and acting to be really impressive. Camfield’s casting is always good and his rep company are brilliant again. Kevin Stoney is brilliant as Vaughn: turning on the charm offensive to try to win over the Doctor, increasingly losing his patience with Packer, and finally giving perhaps the most terrifying villainous rant there’s yet been in the show. He even looks great: like the Doctor in negative, a mop of white hair, the same craggy face, a genuine equal and opposite for Troughton. 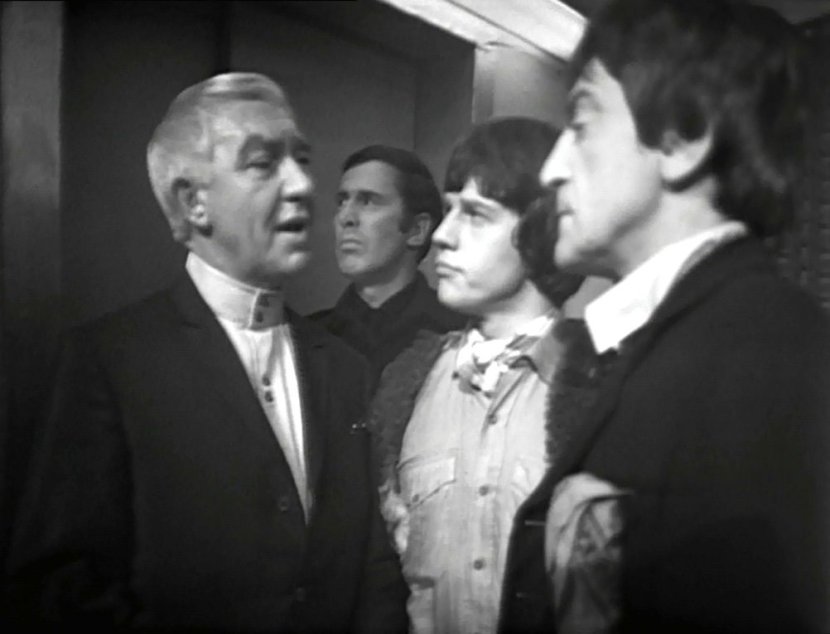 But it’s not just Stoney. As Packer, Peter Halliday is pretty much the best henchman we’ve seen. Cruel, grim faced and increasingly panicked as the Doctor wrong-foots him. As his boss glowers at him, his squeak of ‘Move!’ at his own men is a beautiful touch. And as Professor Watkins, in a fairly minor part, Edward Burnham is exactly right for an academic in over his head.

But, and it’s a big one, a vast chunk of this episode consists of the Doctor and Jamie escaping in a lift. Last time Camfield directed an epic, the Doctor and Steven had joined up with Nick Courtney, outfoxed Kevin Stoney, stolen the super-weapon from the monsters and gone to a different planet. Here, the monsters haven’t even turned up (although the cliffhanger, of Jamie trapped in a coffin with something writhing under a shroud, is brilliant). Everything is moving much more slowly than The Daleks’ Master Plan, and while there’s a sense of progression that prevents this from being dull, equally it’s not as attention grabbing as Yeti roaring in Covent Garden station, or giggling robots exploding a building. So far, this all feels like a very extended first episode.

Next episode: “The Invasion” – Episode Four