As the second half of the story begins, the revelations begin to accelerate. Most notably, a couple of minutes in there is the first mention of the War Chief’s own people as the Chief Scientist mentions ‘the Time Lords.’ If it wasn’t already, it’s obvious that both the War Chief and the Doctor are fellow Time Lords, and their space/time technology has enabled ‘this whole disgraceful business.’ Zoe asks the Doctor how he is so familiar with the SIDRAT controls, and Jamie points out they they are like the TARDIS, while the Doctor only admits they are ‘a slightly different design’. After 248 episodes of the Doctor being a mysterious traveller in time and space, it seems that some of the mysteries are finally being addressed.

This is all fairly astonishing. Fittingly, the Doctor gets loads to do, and this starts to become a Troughton farewell tour. He gets disguised as a British soldier in mask and trench coat and, joy of joys, a hat, just like he did way back in The Highlanders. While Zoe frets about Jamie’s fate, he takes command, and is evasive when questioned about the SIDRAT controls. He tinkers with his sonic screwdriver, runs rings around the Security Chief’s guards, and tops it all by doing the thing that kicked off the whole series – stealing a time machine. 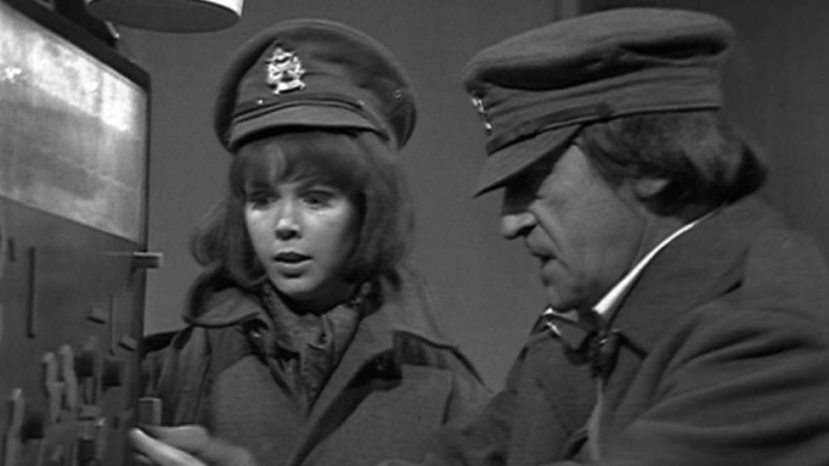 The resistance plot is slightly on hold this week, although David Troughton turns up as Moor to be bamboozled by the aliens, wrestle Russell, and finally kill Von Weich. However, the enmity between the Security Chief and the War Chief, with the Chief Scientist caught in the middle, escalates – as is often the case in organisations with too many chiefs. Interrogating the captive Jamie, the Security Chief seeks to gather evidence that his enemy is a traitor, but the War Chief is canny enough to leave the matter open to doubt as he correctly surmises where the Doctor and his resistance friends are heading, before trapping them inside a shrinking SIDRAT. It’s clear that both of them live in fear of disfavour from the still-unseen War Lord, but pretty soon, surely, the boss is going to have to step in.