So, after spending three episodes building up to a showdown between the Doctor and the Daleks… It doesn’t happen. He spends the episode retreating from them, luring them into a trap and watching them get blown up by the same bomb that was meant to ensure their future. It’s poetic justice. It’s a logical resolution to the time paradox. It’s also a bit of an anti-climax. Last time the Doctor confronted the Daleks he went up against their Emperor. This time, he doesn’t even get to berate a subordinate.

Despite in theory being as powerful as ever:

The Daleks have discovered the secret of time travel. We have invaded Earth again. We have changed the pattern of history.

The Daleks’ grand plan to ensure their version of history prevails is to transport three of them plus some Ogrons, not exactly the sharpest of their tools, to 20th Century Earth. For what could have been a poster moment the final battle between them and UNIT, fortunately for the Brigadier, is therefore pretty underwhelming, to the extent that the BBC remade the whole sequence when they released the story on DVD.

The Daleks are the weak point of a story that elsewhere works very well. The time paradox is well articulated, with Pertwee explaining to the guerrillas, huddled in a bunker at the end of the world. that they created the very Third World War they’re trying to avert. The scene skirts with the same dilemma the Doctor faces in Genesis of the Daleks, with less grandstanding: will the Doctor kill one man to save billions. His mercy, his unwillingness to let Monia murder the Controller, whom minutes earlier he’s denounced as a traitor and a quisling, is the Bilbo and Gollum moment that eventually ensures things can be put right. 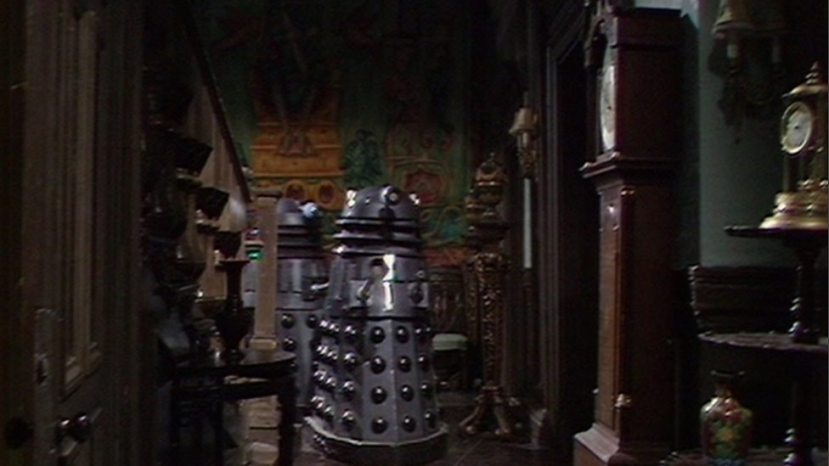 This is all very satisfying, as is the way the guerrilla bomb is used to destroy the Daleks rather than the peace conference. The scenes of the Daleks moving through the empty Victorian rooms of Auderly House is very reminiscent of The Evil of the Daleks, and the mention of Skaro, as well as the deleted reference to the Dalek civil war, suggests either Terrance Dicks or Louis Marks viewed the story or at least a detailed synopsis before writing this. As a Doctor Who story this works just fine. As the grand reintroduction of the Doctor’s greatest enemies it’s perilously close to being a damp squib. Still, it’s another conscious milestone on the way to expanding the show’s range back to its 1960s heyday.

Next episode: The Curse of Peladon