Something that I’d never really noticed until this pilgrimage was the gradual snowballing of Time Lord continuity well before the 1980s. They didn’t exist before 1969 and were largely noises off during the Pertwee years (barring the reveal of Omega’s feat of stellar engineering). But under Robert Holmes their planet got a name, we’ve learned more about their grubby history and moribund society. Underworld, fittingly, positions itself as another important reveal of Time Lord mythology: the reason why they’re strict non-interventionists (except where Earth, Uxaerius, Peladon, Solos, Skaro or Karn are concerned).

Some of this is the grandest material Baker and Martin have written: TARDISes are ‘the time ships of the gods’, and regeneration is repositioned from the miracle of the Time Lords to the curse of unending life (the Doctor explicitly mentions he’s regenerated ‘two or three times. Not pleasant’, so no-one’s yet buying the Morbius Doctors). The quest of the Minyans has been ongoing for 100,000 years, and taken them to the very edge of the cosmos and the limits of creation. The Time Lords are to the Miynas as the Osirans and Daemons were to ancient humans. Heady stuff. 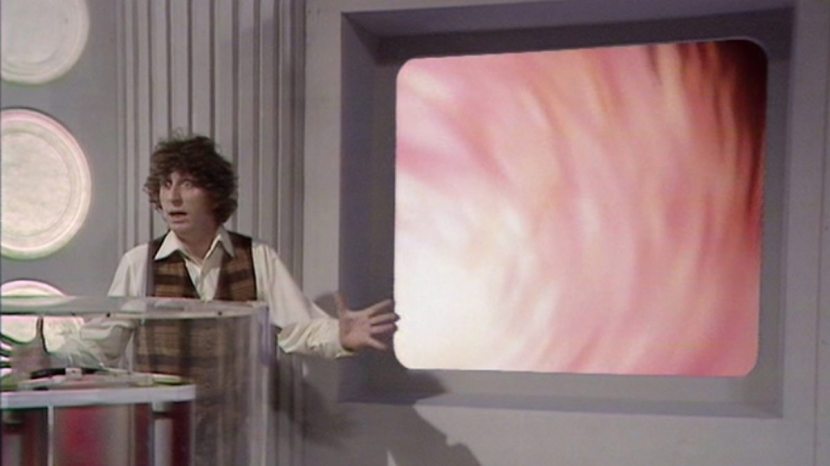 Given the serial’s reputation, this first episode isn’t at all bad. Most of the effects shots look good: the R1C being buried by asteroids is as good as any model work in the show to date, and the big bridge set is a bit shabby – but that sort of works given the duration of its mission. Points off for the missing CSO in some shots, but largely the design is fine. This feels like a passable episode of Star Trek: a swirly space anomaly; advanced aliens worshipped as gods; an old woman who is rejuvenated to become young and beautiful; a pacification ray; a wise commander and a hot-headed crewman. You can see why Baker and Martin thought this could have spawned a spin-off.