Shada hangs like a ghost over Doctor Who, often glimpsed but never definitively. There have been at least half a dozen attempts to do so: in books, audios, animations, official and unofficial. As far back as 1980 the new producer John Nathan-Turner proposed finishing it off as a couple of specials. But it defies all attempts to exist as a final version. Even the 2017 version, a Frankenstein’s Monster of original footage, animation and newly-recorded video, almost consciously avoids being the definite article by virtue of excising the cliffhangers and episodic structure. As much as any of the missing 1960s episodes, it’s impossible to experience this as it would have been on TV. It doesn’t exist. It never existed.

And yet, it exists. It’s available to buy on Blu-ray or stream on BritBox. So, while it doesn’t form part of my watch through of the broadcast episodes, equally it’d be perverse to pretend it’s not there. Especially perverse, because this is by Douglas Adams, and for all it’s faults that’s a guarantee of a certain level of quality. 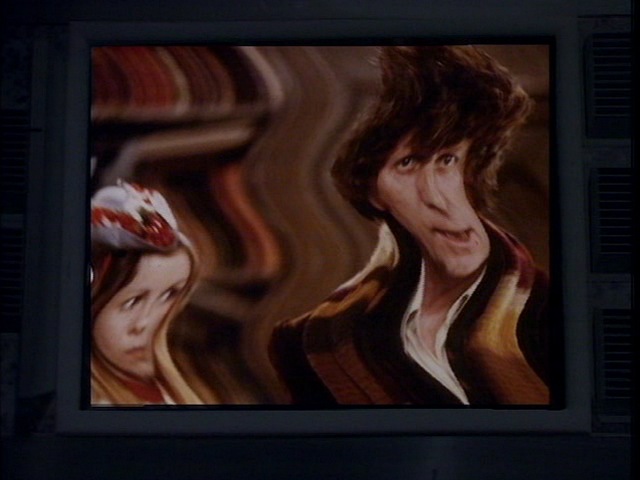 It’s a spiritual sequel to City of Death. That’s obvious from the structure, which begins with a teaser in a different time and place before flipping to the present day and lots of beauty shots of the location. Cambridge looks great: a bit drizzly and autumnal compared to the spring blossom of Paris, which feels apt given that the winter of the fourth Doctor is just around the corner. All these scenes are charming: as charming as the Parisian interludes in City of Death. The punting scene, lifted for The Five Doctors, is beautiful.

The comparisons with City of Death are more than just cosmetic. They both share an interest in the fungibility of time, and of objects that allow you to access the past (no Mona Lisas or Gutenberg Bibles here, but a far rarer and more precious book). Chronotis’s claim that, ‘There’s no one interested in ancient history on Gallifrey any longer’ echoes the Doctor’s cry of ‘Is no-one interested in history?’. The villain represents the end of history and only values artefacts that help him accomplish his goals. His capture and co-opting of Romana is very like Scaroth’s. Skagra could almost be another Jagaroth splinter: his ‘Time. Time. About time. Yes, of course. I should have seen that’ sounds like Scaroth’s, ‘Time, Professor. It is all a matter of time.’

The major difference from City of Death is that this is six episodes long but doesn’t have nearly two and a half hours of plot. The scenes between Chronotis and Chris Parsons (this story’s Duggan), and then the Doctor and Romana are charming, but they do go on a bit. Adams is good at making the exposition witty, but there’s an awful lot of it. He has the Doctor and later the policeman repeating basically the same joke about the value of taking over the universe/stealing a room. The first couple of episodes are largely Cambridge travelogue and old friends reminiscing while Skagra, who starts off dressed like a Movellan, seethes his way around various locations. The middle section shifts to Skagra’s ship and space station, and the last episodes focus on the prison planet Shada itself. It’s a neat way to show progress, but a lot less economical than City of Death’s quick trip back to 1505. And the end, which involves Salyavin giving away his secret for no obvious reason and the Doctor building an electric hat, is not one of the classics.

The bits that exist are entertaining – it’s lucky they managed to record the drawing room comedy in Chronotis’s study, which is the heart of the story, plus one sequence of an attacking Krarg that makes them look more impressive than the Mandrels or Nimons. The sets we see look better than the ones in Nightmare of Eden or The Horns of Nimon. If it had been finished I imagine it would have easily been the most popular Williams-era six-parter (not that the competition is strong). I suspect it would fare less well pitched against Genesis of the Daleks, The Seeds of Doom (though I think it’s better) or The Talons of Weng-Chiang. I love the relationship between the Doctor and Romana, the fact they can swap roles (‘I can do your part if you can do mine’) and the cute medal-giving ceremony.

It’s sad this wasn’t finished. It’s very sad that Graham Williams and Douglas Adams didn’t get their final word on the show. It’s a more obvious segue into the cold solemnity of Season 18 than the knockabout flamboyance of The Horns of Nimon. It’s not as good as The Pirate Planet or City of Death. Daniel Hill sounds disconcertingly like Nick Briggs.