‘I can’t bear the sight of gory entrails. Except, of course, on the stage.’ All the ingredients of a Robert Holmes concoction are here: the baroque dialogue, a series of double acts, moments that recall past triumphs (the perils of the abandoned Space Station Camera reminded me of Nerva in The Ark in Space). The Time Lords are characterised as the pompous hypocrites of The Deadly Assassin, using the Doctor as their agent to give themselves plausible deniability. Their engagement in space politics with the Third Zoners on the cusp of a time travel breakthrough feels more like one of Gary Russell’s Gallifrey audios than anything else in the classic series.

You can tell it’s a mid-1980s story because it opens with the second Doctor and Jamie in black and white. I quite like this, even though I can’t imagine any other production team being quite so happy to lean into the old favourites while keeping their own team off the pitch until the 10-minute mark. Perhaps it’s why Troughton is playing this less light-heartedly than in his anniversary comebacks: he’s still fun, but there’s an undercurrent to his performance that’s not there in The Three or The Five Doctors. Holmes mirrors the two Doctors and companions, with the second Doctor’s gentle ribbing of Jamie largely feeling like the sparring of the sixth Doctor and Peri done right: that’s until the second Doctor loses his temper and uncharacteristically goes for Jamie’s jugular with ‘hairy-legged highlander’ and ‘appalling mongrel dialogue’ in the same way the sixth Doctor often criticises Peri’s Americanisms. It’s also quite funny that an alien lusts after Jamie in the same way they usually do to Peri. 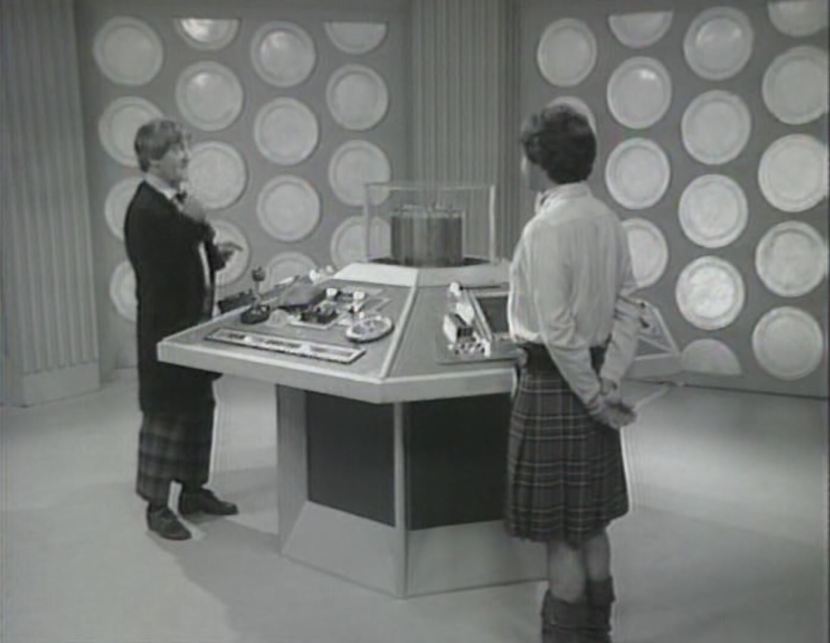 The continuity is a bit strange: I can only imagine Saward was more interested in humouring Holmes than Levine. It was Holmes’ fourth Doctor that was usually the reluctant tool of the Time Lords as ‘the price I pay for my freedom’. As a sop, perhaps, the second Doctor mentions dropping Victoria off, but the easiest way to square this with continuity is the implication that these events are being steered by the Time Lords of the 1980s, retrospectively interfering in the sixth Doctor’s past – that seems to be the implication of the sequence where the second and sixth Doctors suddenly going out of kilter, and the line ‘The most likely explanation, of course, is that I haven’t synchronised properly yet.’ In fact, it’s much harder to square the sixth Doctor’s demonstrably untrue assertion, just one week after the Master and Rani murdered a load of Geordies, that, ‘The use of force is alien to Time Lord nature.’

Beyond the two Doctors, the script delves into ideas of nature versus nurture and genetic interference, with Chessene as a sort of Bride of Frankenstein (if only they’d added some white streaks to her appalling wig) operating at ‘mega genius level’. References to racial purity versus mongrels run through this, especially the racialist attitudes of Shockeye, who disdain’s Chessene’s augmentations and urges her to hold to her Androgum nature, and, less palatably, the Doctor’s own dislike of Androgums (‘I’m not interested in the pedigree of an Androgum’; ‘She’s still an Androgum. You can’t change nature’; We haven’t got time to bother about dead Androgums’). Dastari says he’s given up on his own gene pool: ‘Our races have become tired and effete. Our seed is thin. We must hand the baton of progress to others. If I can raise the Androgums to a higher plane of consciousness, there’s no limit to what that boiling energy might achieve.’ This is all very Churchillian ‘New World, with all its power and might’ stuff.

So, this is very uplifting if you’re an American, and very insulting if you’re a Scot. But what if you’re Spanish? The Seville scenes look baking hot, and the villa is a different setting: all of this is goodness, why complain about something not being “essential” to the story if it’s gives it some flavour? The problem is that Peter Moffatt’s direction doesn’t do anything to exploit the location. It’s just sort of there. So are the Sontarans: why initially hold back showing more than just a three-fingered hand when, minutes later, Moffatt does the infuriating 1980s thing of just having them wandering into shot without making something of it? This languid pace continues through scenes of locals Oscar and Anita pottering about hunting moths, and the Doctor and Peri spending a very long time wandering about Space Station Camera. By the end of the first episode the stakes are still a bit hazy: I suppose there are several threats – to the stability of the time vortex, to the Doctor’s personal history, to the Earth – but none is very much in focus.