Episode One: At the Temple of the Fourth (3/7/2001)
‘Shoot me, get on with it, I don’t mind. I’ve been dead before.’ The first BBCi webcast episode heads in a direction the revived TV series avoided (at least initially), taking its cues from 1990s sci-fi blockbusters (the space blockade, planetary invasions, defiant senators and mystic alien teachers are all very Star Wars), rather than Yetis on the loo. After an airy fairy voiceover, it opens noisily, in the middle of a battle between two alien fleets: the baddies led by the smug and evil general Tannis (a smarmy John Sessions) and the goodies commanded by Admiral Mettna (Jacqueline Pearce). It’s noisy and fairly butch, culminating in a trooper telling the conquered senate, ‘No help is coming’ just as the TARDIS materialises and the Doctor pops out.

After this, the episode gets more engaging and quite strange. A mysterious old man called Casmus rescues Ace from prison, and begins to teach her in a roundabout way, through parables like the painter that fell in love with his artwork but became frustrated that the painting couldn’t comprehend three dimensions. Meanwhile, the seventh Doctor is accompanied by a naïve young man called Antimony, and is oddly wistful and rule-bound, even while he’s plotting to instigate planetary rebellion.

At the head of an impressive cast, McCoy gives one of his strongest audio performances, flipping between being in control and unbowed by threats of violence, and then seeming to be worn down by responsibility and regret. He appears to be working for a higher power, summoned by the Minister of Chance (Stephen Fry), who is concerned at the violent deaths of Time Lords, and swaps missions with him. It’s all decent set up, even if the crude animation is only really useful to indicate settings and characters.

Episode Two: Planet of Blood (14/2/2002-1/3/2002)
‘When you eliminate the possible, what remains however improbable is usually what I’ve just said.’ This wears its Buffy the Vampire Slayer influences on both sleeves, with a vampire loose on Earth attacking patrons of a bar, while Anthony Stewart Head plays an unflappably British Time Lord who gets offed in his library. There’s also a hint that the writers are aware of the 1997 eighth Doctor novel Vampire Science given both involve the Doctor tricking a vampire into drinking his tainted blood.

It’s got the light comedy horror tone of Buffy, too, with Antimony coming across like Anya (I suppose Cain makes a plausible Darla), disconcerted by the strange ways of human beings and utterly failing to be a convincing Earth person when questioned by investigators Campion and Speedwell. To balance this, the Doctor is genuinely horrified by the vampire massacres, and the illustrations don’t shy away from showing the gory details.

The Nineties sci-fi influences are most obvious in the series of apparently unconnected events happening across the universe: Ace preparing for some sort of test as Casmus continues to offer gnomic advice; the Minister of Chance making contact with the Santiny resistance, and General Tannis plotting his next move – with Earth as a potential target. Old school Doctor Who was rarely so expansive.

Episode Three: The Child (8/3/2002-22/3/2002)
‘We are in the painting so we cannot see the painter.’ An episode built around two daring gambits, each engineered by a different Time Lord. The Minister of Chance and Sala get a scene that’s replayed in The Angels Take Manhattan, as the Minister uses Time Lord powers to heal Sala’s broken wrist before they bamboozle the hapless Captain Carne into becoming their unwitting ally.

Meanwhile, on Alpha Canis, the Doctor and Antimony pretend to be criminals to get a meeting with the leader, Bedloe – who’s eponymous child has been abducted by General Tannis in order to keep him in line. This includes some amusing moments for Antimony, who’s becoming the reliable comic relief, shouting at a random passerby to find out information the Doctor would have subtly teased out.

Better still, the manipulative seventh Doctor seems to have been outmanoeuvred by Tannis, who’s shaping up to be a worthy opponent. His plan to conquer the universe gives a tangible through line to a story that otherwise threatens to be fragmented across three parallel plots each with its own lead character (the Minister’s, the Doctor’s and Ace’s cryptic training). 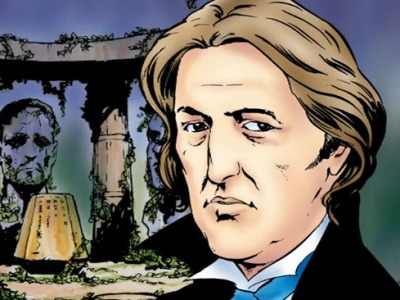 Episode Four: No Child of Earth (29/3/2002-12/4/2002)
‘Loneliness, isolation, centuries of solitude, all your acquaintances age and die before your eyes, they fall in love and they leave you. Why not build one that will last forever?’ The themes come into sharp focus: it’s all about the use and abuse of power. The Doctor has great power, but he follows the Time Lord code and refrains from using more than a hint of it. Ace is learning the rules and not to take the easy path. The Minister, confronted with a dying friend begging him to save her planet, breaks the rules and unleashes his power.

Which is all very interesting, even if it reimagines the Time Lords as cosmic superheroes rather than a race of non-interventionist gods. It’s hard to square this with The War Games’ concept as the Doctor being the one to object to the Time Lords’ lofty indifference, and to head out into the universe. Here, that role largely falls to the Minister, who initially heals Sala’s mortal injury, and then, on a grand scale, drives off Tannis’ invasion of Santiny.

In fact, the Minister largely fulfils the Doctor’s role, wooing a new companion and saving a planet. Between this and Ace’s encounter with the Kingmaker and trials in the Cavern of Infinite Death, there isn’t much space for the Doctor. As such, barring one scene in which Tannis reveals his very prosaic motives (‘It’s so unimaginative I’m almost embarrassed to say. To run the universe’) and Antimony is revealed, to his own surprise, to be an android companion, McCoy is barely used. However, the cliffhanger, with Tannis turning his attention to the Earth, suggests soon the Doctor and Ace will be faced with the same choice as the Minister.

Episode Five: Death Comes to Time (19/4/2002-3/5/2002)
‘We are what we do.’ Apart one from excruciatingly bad scene (what was that NASA Mission Control nonsense?), and some very dated Bush/Blair satire this works surprisingly well. Putting London in Tannis’ line of fire and then having the Brigadier ride to the rescue in Union Flag branded space shuttles to save it is a punch-the-air moment, rapidly followed by the melancholy exit of the seventh Doctor, taking Tannis with him.

I like that Tannis’ universal conquest plan was actually a ruse to draw out his rival Time Lords without breaking the Laws of Time: retrospectively it makes him a much smarter villain than he initially seemed. Instead, it’s the Minister’s breach of the code that has brought about chronic chaos. Like a George Lucas villain he’s done the wrong thing with the right intentions. I like, too, that the reunion of the Doctor and Ace is saved for the last moments, and a symbolic handing of the baton. Where it falls down is that Ace’s new Time Lord abilities ultimately seem incidental to the climax. She’s got to Andrew Cartmel’s endgame, but we’re still left wondering “so what?”

If it doesn’t quite come together, this is still much better than its reputation. Many of its instincts are sound: when Russell T Davies brings the show back in three years’ time, it could almost follow on from Death Comes to Time, with the Doctor having destroyed the Time Lords to save the universe, wandering as the “lonely god”.

The very basic “animation” is more like watching a telesnap reconstruction or a comic strip, but that’s not a huge issue given a lot of Doctor Who stories can only been experienced through still images. They help to establish locations and characters, and the choice of backdrops (a snowscape, a verdant forest, blood caverns) means each place has its own identifiable look. It’s definitely helps given the plot spans multiple times and planets. And some of the illustrations, like Antimony’s death, are surprisingly gruesome. I’ve never managed to make it through the audio-only version of Death Comes to Time; the only way to experience it is as a webcast.