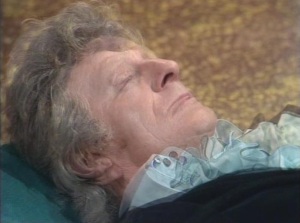 December 1974. 20 months have passed since our last blog post. The most significant world event in that time is the resignation, in August 1974, of President Nixon. Meanwhile, closer to home, amid the escalation of the Troubles in Northern Ireland and a murderous IRA bombing campaign, Harold Wilson and the Labour Party are returned to power after two, inconclusive general elections: in short, a curious mix of change and more of the same. And that’s pretty much what we get from Doctor Who when Jon Pertwee, having played the Doctor for five years, bows out in June’s Planet of the Spiders.

The opening moments of Robot recap the Doctor’s third regeneration. As his two friends stand by, the Doctor, looking stricken, collapses to the floor, his familiar face and mane of white hair blurring into the features of a new, dark-haired character. If the production team were re-making the Hartnell era in colour, they could hardly have been more blatant in the reference to The Tenth Planet (the second in the space of one episode, given K’Anpo’s parting line). Not for Jon Pertwee impotently spinning away into the darkness.

The Power of the Daleks was a shocking break with the past, a conscious attempt to reinvent the series in the face of failing ratings, and which shared almost nothing in common with the predominant style of the Hartnell years. Spearhead from Space, while trailed by The Web of Fear and The Invasion, was doing much the same thing, setting up a whole new premise for the series as it went into colour – and, again, reformatting the show in light of the steep decline in viewers at the end of Troughton’s run.

But Robot is different. For a start, the ratings of Season 11 remained strong, peaking at 11 million. So, from the production team’s point of view, there was no burning drive for change. Look at the scriptwriters lined up for Season 12: except for Bob Baker and Dave Martin we can see Robert Holmes, Terrance Dicks, John Lucarotti, Gerry Davis and Terry Nation – writers who cut their teeth in the Hartnell and Troughton eras and were being brought in to do stories in the same, consciously retro style that Barry Letts and Dicks had established since Season Nine.

The only fly in the ointment is that Holmes (who by 1974 was clearly the best writer the show had got and was therefore Terrance Dicks’ natural successor as script editor) wasn’t entirely sympathetic to Dicks’ respect for the past. For example, he’d complained bitterly about having to write a historical for Season 11. Terror of the Autons – the only Pertwee script where you sense he’s really been let off the leash – takes a gleeful delight in being as horrible and disturbing to children as possible, like a Roald Dahl fairy tale.

But Holmes wasn’t yet in charge of the scripts, and new producer Philip Hinchcliffe was only shadowing Letts when the Season 12 was being plotted. It shows. Look at the season’s structure – the first and final stories set on Earth with UNIT, with the intervening episodes mixing space adventures and Dalek epics. Just like every season since 1972. In short, everything about Season 12 screams “more of the same.”

Look at the first scenes with the new Doctor, and you can clearly see Terrance Dicks referencing Jon Pertwee’s first story – a hospitalised Doctor, the TARDIS key hidden in a pair of shoes, references to his two hears, a mirror scene that’s been done in both previous regeneration episodes. It’s all highly amusing whether you remember Spearhead from Space or not. The big difference is in the last two transformations, the new Doctor has to convince his friends – and us – that he is the same man. Here. It’s never in any doubt.

Despite that, what’s really interesting about this transformation, though, is how closely it reflects the original changeover from Hartnell to Troughton. Much has been written about how the second Doctor is a kind of degraded version of the first, how the production team envisaged it as a kind of Jekyll and Hyde metamorphosis, and how Troughton’s costume is a tramp’s parody of Hartnell’s. The thing is, this is absolutely, equally true of the change from Pertwee to Baker. The fourth Doctor is a degraded version of the third, the elegant red velvet jacket, waistcoat and cravat replaced with a baggy corduroy coat, a cardigan and a neckerchief. Whereas the third Doctor was essentially serious about what he did (if not necessarily the way he did it), the fourth Doctor, with some arresting exceptions (like the moment when he snaps at Benton for letting Sarah Jane leave with Kettlewell), treats this whole adventure almost as a massive joke – and it’s going to be a characteristic of this new Doctor that he treats his adventures as amusing diversions in the vistas of eternity.

Moreover, Tom Baker is, like Patrick Troughton, a very physical actor. While Jon Pertwee loves being the solid rock around which a scene is built – standing steadfast, hands on hips, cape flapping, or lying in the famous death pose – Tom Baker is constantly moving. Watch the scenes outside the military bunker in Part One. As the Brigadier and Harry talk plot, the Doctor is digging about in the background, looking for clues and thereby dominating the scene even when he’s not centre stage. At the end of Part Two he gets an extended sequence where he practically dances around the lumbering robot. And in every scene, he’s doing something, messing with a prop or playing with his scarf. Terrance Dicks even has him inherit the second Doctor’s jelly baby habit from The Three Doctors.

That’s part of the genius of this story: that the plot is an excuse to get Tom Baker into a lot of situations where he can be interesting to watch. Baker always claims that the Doctor isn’t an acting part, and it’s therefore the quirks the actor brings that make him interesting. Essentially, Tom Baker plays the Doctor as if he were Tom Baker. Compare that to Pertwee’s self-confessed approach – playing the Doctor as if he were Jon Pertwee – and we see why these two actors are the ones most associated with the part, and why Tom Baker, though different in many respects, is the only classic Doctor to match Pertwee’s charisma and presence.

A similar thing has been happening with the companions. On paper, Sarah Jane Smith and Jo Grant are hardly high-concept characters (not, for example, super-smart space girl, or savage from the future on an Eliza Doolittle educational journey). Sarah Jane is, in theory, a bit more liberated than Jo, but both of them are independent only as far as it allows them to get into trouble and require rescuing. The reality is, it’s Katy Manning and Elisabeth Sladen that make the characters work. Sladen is particularly good at making Sarah Jane fearless and vulnerable at the same time, brazenly striding into danger until she realises that she’s in over her head. This means that Sarah Jane is an ideal companion: brave enough to follow the Doctor into any adventure yet scared enough to help sell the peril to the audience. Sladen is especially good at implying that Sarah Jane is constantly struggling between doing the sensible thing and walking away from the Doctor’s mad schemes, and excitedly joining in with them. You can see a perfect example of this in the final scenes of Part Four, where the Doctor offers her the chance to either remain on Earth with her job, or chuck it all for danger, and monsters, and life or death. The emotions flicker across her face for a moment before she, like us, commits to this new man.

The other really fascinating thing about Robot is that it’s the third story in the last seven that features no alien menace at all. Once again, humankind is the agent of its own destruction. The Doctor makes this moral explicit in Part Four when he compares the dead robot to human beings, “capable of great good, and great evil.” That’s typical of an increasing ambivalence about our species that’s only going to become more obvious as the new Doctor settles in: one minute he’ll be praising us as indomitable, the next he’ll be more alien and distant than ever. And at some point, he’s going to stop travelling with human beings altogether, for quite a long period of time, as though being forcibly confined with us for so long has been too much of a good thing. Certainly, from the moment he regenerates this Doctor is keen to be off. “I can’t waste any more time – things to do, places to go,” he says to Harry, off-handedly dismissing the whole UNIT era in a sentence.

In the end, Robot is as strange a story as the new Doctor it introduces. In some respects it’s a comforting continuation of what’s gone before, while in others it’s half turning its back on the Pertwee years. Only half, because even when Barry Letts and Terrance Dicks have both gone, Hinchcliffe and Holmes keep clutching on to UNIT, though less tightly each time the Doctor goes back to 20th Century Earth. For the most part, that’s a good thing: a mark of respect for the quality Letts and Dicks brought to the show. Unlike the last two regenerations, which threw the baby out with the bathwater and, as a result, lumbered the show with unsustainable formats, this time it looks like the incoming team might have learned all the right lessons, keeping the bits that have been effective while making the Doctor and his adventures less comfortable and familiar for the audience – but not too uncomfortable or unfamiliar.

While Tom Baker was making his debut, Pertwee was in another studio filming his swansong: life bizarrely imitating art as the old man and the new co-existed. And that’s Robot all over: a strange, transitory story that works like a roll back and mix between the two eras.

But, just as in 1966, there is an undercurrent that this new Doctor – and therefore the series – is suddenly much more dangerous than before. If the fourth Doctor really is a dark side of the third, an attempt to do a Troughton to Pertwee’s Hartnell, then might we expect the new era to reflect that darkness? If the biggest change between the Hartnell and Troughton eras was a move from a universe of wonders to a universe of terrors, might we expect that cosmic paranoia to re-emerge? You might think that if the production team really were taking inspiration from Troughton, we’d get futuristic space stations under siege, humans falling under the mental domination of alien intelligences and becoming their puppets, Cybermen and Cybermats spreading mayhem, an epic Dalek-myth story and monsters from under the sea rising to menace offshore rigs. Maybe even a companion wearing Victoria’s old clothes. But surely they’d never be that blatant?

Next Time: “There are some corners of the universe which have bred the most terrible things. Things which act against everything we believe in. They must be fought.” It’s time for the Genesis of the Daleks.