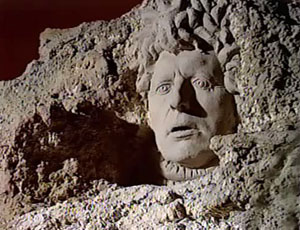 It’s January 1977, and in the six weeks that passed between the end of The Deadly Assassin and the first episode of this story, the most notable UK news has been the country’s receipt of a loan from the IMF in the same month that the Sex Pistols achieved public notoriety after an appearance on Thames Television’s Today programme. Against a backdrop of national decline, punk, with all its anti-establishment connotations, has arrived to spit in the face of the popular consciousness.

It’s a happy accident, given that this story had been on the cards since about 1975, that The Face of Evil captures something of the confrontational style of punk. The first of three Chris Boucher episodes from 1977, this one – which famously had the provocative working title The Day God Went Mad – makes no bones about its contempt for religion: the Doctor outright dismisses “religious gobbledygook” at one point. However, there’s more going on here than that.

When asked at a convention what was her favourite Doctor Who monster, Lalla Ward replied, “Tom Baker”. She was more right than she realised. The Face of Evil is the Doctor’s: in this story, he’s having to pay the price for a past mistake. “I thought I was helping them,” he muses, as he realises horrible implications of what he’s done. Later, he blames his own egotism for Xoanon’s mental breakdown: the computer can’t handle being the Doctor, and has gone mad. Quite what that says about the Doctor’s sanity is skipped over. But it’s interesting given 2013’s overarching storyline that the cliffhanger of Part Three has the Doctor being bombarded with the one question he’s never answered, the question that’s driven Xoanon insane: “Who am I?”

Apparently, when he came to design a new companion to replace Sarah Jane, producer Philip Hinchcliffe was partly inspired by a neighbour’s daughter who claimed to identify more with the Doctor than Sarah. You can see why that might be the case: Tom Baker’s Doctor has a habit of occasionally turning to camera to deliver a joke to his audience. But it’s never more blatant than here, when he spends his first scenes addressing 11 million viewers directly, looking out of the screen and into the living room. Back in 1977, Doctor Who really was taking over TV. In the design of Leela, then, Hinchcliffe implicitly recognises that the viewers no longer need a contemporary human as their way into the Doctor’s universe – they’re already engaged with the Doctor himself. That freed him to come up initially with the idea of a Victorian urchin who would be the Doctor’s Eliza Doolittle: asking questions to help progress the plot, but in other respects not an obvious audience identification figure.

Then they made this story. Right from the opening scenes, it’s obvious that Louise Jameson is an excellent actor, easily dominating the scenes where Leela is on trial, and establishing herself immediately as someone interesting that we want to watch. Boucher cleverly writes the opening practically as an audition scene, giving Jameson the chance to be defiant, upset, pleading, and frightened all in the space of a couple of minutes. She leaves the Sevateem as an exile, condemned for questioning the ancient traditions of the tribe, and a few minutes later bumps into the Doctor – another exile with a dangerous habit of questioning authority. By this stage, it’s clear to the audience that these two are made to be together, and they remain together for pretty much the whole of the story. By the time Leela runs into the TARDIS at the end, we’ve already accepted her as a de facto companion. It would be inconceivable for her to be left behind.

Hinchcliffe must have recognised this potential at an early stage, and so the Eliza Doolittle plot is transferred across to Leela. Here, it mainly manifests itself as Leela’s readiness to kill with deadly Janis thorns, and the Doctor’s obvious disapproval of that. But Leela’s obviously an apt pupil, fascinated by the Doctor’s world and eager to learn. The other obvious thing is that she’s named after the hijacker Leila Khaled, a poster girl for Palestinian liberation and Marxist revolution. Thus the Doctor ends up travelling with a companion whose anti-establishment credentials are as overt as it was possible to be in a BBC family show in the mid 1970s.

What this says about the direction Hinchcliffe and Holmes wanted to take the series is unclear, but given Season 14 is a move away from the established format of 1972-76, and given the previous story is a pretty clear tying up of the Doctor’s subordinate relationship with Gallifrey, the implication is that they wanted to broaden the Doctor’s adventures, and get away from a reliance on old monsters and UNIT. The idea of a companion from Earth’s history learning about the universe, which evolved into the idea of a savage future descendant of humankind learning about human development, suggests they were keen to end the Doctor’s ties to 20th Century Earth.

As the first Hinchcliffe story with no elements carried over from Barry Letts and Terrance Dicks, The Face of Evil is the pathfinder for the new approach. It’s interesting that it’s another clear attack on superstition, with the Sevateem and the Tesh, like the Time Lords, having degenerated from people on a scientific expedition to people who treat their machines as holy relics. It’s also interesting to note that Hinchcliffe’s favourite of his stories seems to be The Masque of Mandragora – he novelised it and wanted it to be repeated as part of the 1981 Five Faces of Doctor Who season. It’s a story about the conflict between religion – which is shown to be the result of an unquestioning obedience to an alien intelligence – and the new renaissance of science and empirical observation.

In The Face of Evil, we see the Doctor’s dislike for religion. He also claims that “Answers are easy, it’s asking the right questions that’s hard.” The spirits in the forest and the Sevateem god are just projections of a badly programmed computer. In the cancelled Foe from the Future, the ghosts are actually the results of botched time experiments, and in The Talons of Weng-Chiang the god Weng-Chiang is actually war criminal Magnus Greel. Time and again in this era, the supernatural is revealed to have a rational scientific explanation.

Had Hinchliffe and Holmes stayed on, Season 15 could well have pushed this further. We already know Terrance Dicks was going to write The Witch Lords, a story that showed vampire myths were actually based on memories of ancient aliens. We would have a companion with the name of a Marxist revolutionary whom the Doctor is teaching to see that everything has a scientific explanation, that superstition and an unquestioning respect for tradition and authority must always be confronted. “Never be certain of anything,” he says. And we’d have a Doctor who’s no longer beholden to the Time Lords, who makes it clear in The Face of Evil that “I don’t take orders from anyone”. Very punk.

But instead, during rehearsals for the next story The Robots of Death, Hinchcliffe was introduced to his replacement, Graham Williams. A few weeks later, he was gone. He never got to fully realise his vision for Doctor Who, and The Face of Evil stands as the pilot for a lost future.

At the end of the story, the Sevateem and the Tesh bicker about who’s going to lead them into the uncertain future. “That’s not my problem,” says the Doctor, turning his back on the people he’s just freed, apparently having learned nothing from the disastrous consequences of his last visit. “Don’t be told what you want. Don’t be told what you need. There’s no future for you.”

Next Time: “There is evil in the universe that must be fought, and you still have a part to play in that battle.” The Doctor gets a new boss in The Ribos Operation.