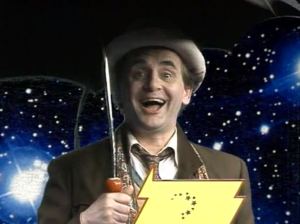 1990. After a decade in retreat, the British left wing seems to be rising. 200,000 protestors riot in London against the introduction of the Poll Tax. The UK slips into a recession, and against an apparently inexorable rise in Labour’s opinion poll ratings, Margaret Thatcher is finally deposed by her own cabinet. The moment Andrew Cartmel and his stable of writers have been hoping for for the last three years finally comes to pass.

But Doctor Who isn’t about to witness it. Because for the first time since 1962, there is no new Doctor Who on TV. Which is a blessing and a curse for this blog. A blessing, because to cover one story a year from 1963 to 2013 would technically have meant I’d end up with 51 stories, and 1990’s wilderness year is therefore a good way to reflect the break between Survival and Timewyrm: Genesys, and stick to the 50 story limit. And a curse, because I’m a Doctor Who fan and therefore a completest, and the idea of having no entry at all for 1990 is therefore unthinkable.

The thing is, from one point of view 1990 really is the wilderness year. It was the year when it became obvious the show wasn’t coming back any time soon. Apart from the ever-reliable Doctor Who Magazine comic strip and the tail end of the Target novelisations, about the only new stories put out in 1990 were the Abslom Daak: Dalek Killer comic book, Mission to Magnus (the last of the novelised ‘lost stories’ from the aborted 1986 series) and Search Out Space, in which the seventh Doctor, Ace and K9 battle the Celestial Toymaker in the form of sinister man-child Cedric, possibly.

As for me, by 1990 I was 10 years old and definitely a Doctor Who fan. No trip to Worcester was complete without a visit to WH Smith and 75p on a Target novelisation. The first time I ever ordered a book was The Daleks’ Master Plan Part I: Mission to the Unknown (Smiths in Worcester only had Part II: The Mutation of Time). I’d been an avid reader of the novelisations since the mid-1980s. Terrance Dicks was my JK Rowling. I was always faintly disappointed that in my primary school library the only Doctor Who book they had was Full Circle by Andrew Smith. I, on the other hand, had piles of Target novelisations – the lists of “also available” books that made up the endpapers of every Target release were carefully ticked, and I was always on the look out to plug any gaps. Preparing for a school trip to Switzerland, my parents took me to the Kingfisher Shopping Centre in Redditch where along with a shell suit (oh, the humanity) and toiletries I bought the novelisations of Planet of Giants, The Space Pirates and Remembrance of the Daleks.

I really can’t overstate how much I adored the Target novels. I always had at least one on loan from Pershore Library, and it was a red letter day whenever I found one withdrawn from stock and on sale for 10p. For my 7th or 8th birthday I’d received Doctor Who and the Tomb of the Cybermen (a particular favourite). For my 9th birthday, my parents took me to Hay-on-Wye and I spent all my birthday money buying up novelisations of mysterious stories like The Awakening and Doctor Who and the Sea Devils. Basically, I really loved the books. And I guess there must have been thousands of people just like me, for whom Doctor Who was largely experienced as a series of books, occasionally interspersed with a TV programme – meaning that continuing the Doctor’s adventures in print was, if not ideal, then entirely reasonable and congruous with the way fans had been following the show since the mid-1970s.

Which means I should have been queuing up for my copy of Timewyrm: Genesys when the New Adventures launched in June 1991. Sadly, though, I just looked on this interloper novel (not on any of the story lists in any of the novelisations) with suspicion. It looked dauntingly long compared to most of the novelisations, and the blurb made it all sound a bit wearisome. And so, when the Target novelisations dried up, so did my interest in Doctor Who, for a couple of years anyway. I didn’t read a New Adventure until 1995. At which point, probably having reached the target age for the Virgin books, I fell in love with the series all over again and bought up almost all of them from a remaindered bookstore, called Bookends, in Worcester – I was lucky that my renewed interest happened to coincide with Virgin losing the licence to do the books, and therefore I think I hit jackpot – picking up rare releases like The Dying Days, So Vile a Sin and Lungbarrow for £2.95.

So, for me 1990 was very much business as usual, even with no TV show. And after 1995, the TV movie came along, and then I was there for the kick-off of the BBC eighth Doctor books, the Big Finish audios and, ultimately, the new series. But, all that’s in the future. In the meantime, let’s see. You’ve got a time machine; I’ve got a gun. What the hell. Let’s kill Hitler.

Next Time: “What did he mean, we saved his life? We could not have just saved Hitler.” Timewyrm: Exodus.