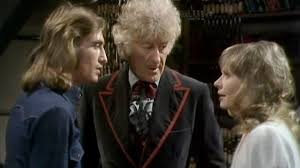 This is the exact midpoint of this countdown, which means that The Green Death is, according to me, the median of quality for Doctor Who. I think that’s probably fair. This is pitched, like Planet of the Spiders, as an ‘end of era’ adventure. This time, it’s Jo getting the best companion departure yet – fitting, since she’s so great. I like that she kind of gets an Emma Peel departure – short of marrying the Doctor, which would be series ending, she marries a ‘younger him’. All this is lovely. BOSS is a great villainous computer, almost like its been programmed by the Master. Does that typical Doctor Who thing of putting a sentient supercomputer with mind control powers, a colony of giant maggots and a glowing-green virus all together in one story, when any other series would pick one of those ideas and go with it.

David Fisher’s one of those scriptwriters, like Chris Boucher and Chris Bailey, who makes a huge impact on Doctor Who for a couple of seasons, then vanishes. Presumably in this case he was a victim of JNT’s ‘no old writers’ policy. It’s a shame, because even his weakest scripts suffer more because of poor execution than bad writing. The Androids of Tara is an example of what happens when the execution goes well: it’s breezy and charming, with lots of neat one-liners, and although it never looks quite as good as it would have done had it been made in 1976, it’s not at all shabby. I think what holds it back from being any higher in this list is that it’s such a transparent pastiche, with such a consistency of tone. Compared to Fisher’s other Season 16 story, The Stones of Blood – which crashes together hyperspace, stone circles and druidic mysticism, vampirism, Rumpole and lesbianism – this does look a bit staid.

On the one hand, it’s blatantly the most effective ‘past Doctor adventure’ there’s ever been, because it’s the first, and it pretty much nailed how to do them on the first attempt. It’s also the only one that succeeded in getting all of the Doctors together, even if Hartnell is confined to a few poignant snippets in a couple of episodes. It was the first story to really suggest a wider mythology to the Time Lords, beyond them being super-powerful space people, and we can’t really blame it for the Cartmel Masterplan or Hell Bent. Omega is a fantastic idea – an embodiment of the power of self-belief, and perhaps a terrifying omen of the future of Noel Edmonds. On the other hand, beyond the ideas and the ‘that escalated quickly’ first episode, it’s not actually that great a story: The Five Doctors has more quotable moments, even if it’s a blatant knock-off of this (various people getting snatched to a dead zone dominated by a huge castle where a legendary Time Lord figure is waiting). Of course, I love it. I just love other stories more.

Like, forgive me, The Sea Devils. I first saw this in 1992, as part of the BBC2 repeat season, so it would have been the second Jon Pertwee story I ever saw, and the first with Roger Delgado as the Master. I definitely saw the Hartnell and Troughton stories they showed in 1992 (The Time Meddler and The Mind Robber), but this is the one people actually talked about at school. We probably talked about the bits that kids in 1972 talked about: the Sea Devil lurking in the abandoned sea fort; the Sea Devils rising out of the water to attack the beach (an actually iconic Doctor Who image, so good they re-used it at least twice more); the Sea Devil attack on the submarine. Bit of a Sea Devil theme there. They are a very pretty monster. I like the idea that 20 years after it was broadcast, it could have the same effect on a new generation of children. Obviously all the criticisms of it being a rewrite of The Silurians stand, but they’re all academic when I actually experienced this as a child, having never seen the earlier story, and loved it.

This was also repeated in the 1992/1993 repeat season (although I’d already seen this one back in 1989). A canny choice, because it’s so clearly the prototype for the New Adventures, just getting into their swing by 1993. Again, there are lots of valid criticisms of the story, but for a certain generation of fans, Brigadier Bambera and this version of UNIT is the first one we experienced: the originals, not the 1970s prequels. All the stuff with a future Doctor becoming Merlin, and interdimensional knights, is slightly garbled in the explanation, but I think that’s probably preferable the idea of hanging a whole 12-episode ‘arc’ around the Merlin revelation as a punchline. Courtney is even greater than ever in this because he’s actually getting to play Brigadier Lethbridge-Stewart of UNIT again, rather than ‘the Brigadier’ of the 20th anniversary (see also Patrick Troughon as Doctor Who in The Two Doctors versus ‘the second Doctor’ in the anniversaries). He’s obviously set up as the returning Arthur, back to fight his final battle in Britain’s hour of direst need, which makes his failure to die at the end actually even more lovely because it plays against the expected pay-off. Battlefield also benefits from the trend in the McCoy era to do most stuff on location, which makes the whole thing look more expensive. Another one I adore.

Back when I was a teenage fan in the 1990s this story made me angry, because it so blatantly has no interest in celebrating Tom Baker’s Doctor. I think I once wrote something like seeing the fourth Doctor written out in this slurry of technobabble is worse than Hitler, or something stupid along those lines. Age has tempered my ability to get so worked up about old telly, and I appreciate Logopolis more now I can empathise more with JNT and CHB’s challenge in writing out Tom Baker, who, by 1981, was practically synonymous with Doctor Who. Lesser shows, like The X-Files, died when they tried to replace the lead actor after seven years. As it is, this is I think by necessity pitched more like a handover episode than a grand ‘end of an era’ Planet of the Spiders. Replacing the old companions first with a crowd of fresh-faced youths, regenerating the Master, and confining old monsters to a brief montage right at the end of episode four was probably the only way to go. Having the ghost of the fifth Doctor haunting the feast, subtly manipulating events to ensure ‘his’ future comes into being, means that from the off the fourth Doctor is a dead man walking, and the story is about tightening the snare until he has to let go of that power cable. I still think it’s a great shame Tom’s final season has a whiff of Hartnell’s – the production team gently but firmly manoeuvring him out of the picture – but I think Logopolis does it more gracefully than I used to give it credit for.

Much as I find Season 18 vaguely depressing as a whole, I don’t think that’s reflected in the quality of individual stories. It’s more the cumulative effect of so many downbeat, sombre serials in succession. Full Circle’s a great example of the individual quality of stories, with the added benefit of Tom being back on top form, giving a really compelling performance that’s been honed to perfection over the previous six years. Witty, dangerous, able to play for laughs one second and ramp up menace the next, I think Season 18 is probably Tom’s most consistently excellent set of performances. Crucially, I think it benefits from him having been allowed to push the comedy in the previous couple of years, beyond the grim one-liners of the Hinchcliffe episodes, so the performance incorporates that silliness as much as anything. Again, when I was younger it was a bit untrendy to name Tom as your favourite – he was like a popular band that everyone loved, so therefore as a contrary teenager you picked the one no-one liked (within reason: never the sixth Doctor). But the reality is, he is stunningly brilliant as Doctor Who. His performance in Full Circle proves my point that JNT and CHB must have been bricking it when they had to find a replacement.

I read the novelisation of this quite early, and found it incredibly memorable (especially the horda), so that when I finally saw the episodes many years later (I think on the 1999 VHS release) I was slightly disappointed. I think that’s because this is relatively slow moving, taking it’s time to introduce the Sevateem and Leela’s place within it, and gradually build towards the revelations of the Tesh and Xoanon. I think The Discontinuity Guide called this ‘The Savages of the 1970s’, which seems quite harsh, because this is far less mundane than the earlier story, even if it has some superficial plot similarities. If it’s like any Season Three story it’s The Ark, because this looks at the consequences of the Doctor’s involvement centuries after his first visit. Not the most fun story, but one of the most interesting. A grower, not a shower.

This is a really intriguing story: the idea of being split over two time periods is neatly achieved through a really clever dissolve between the present-day Brigadier remembering Tegan and his 1977 version meeting her for the first time – a nice touch in a story about memories. It comes together in a fast-paced and easily understandable climax, with a couple of outstanding performances by Davison and Strickson with lots of small but beautiful touches – Davison’s contemplation of death, the ‘reverse the polarity’ in-joke, the greed on the mutants’ faces as their vampiric plan unfolds, and Tegan actually thanking the Doctor for his self-sacrifice. The climax implicitly references Adric’s death in Earthshock: another race back to a ship about to explode in Earth’s orbit, to rescue a young male companion as Nyssa and Tegan urge the Doctor on – but this time with a positive conclusion. The Doctor seems to view Turlough as his amends for Adric, hence his eagerness to take the already untrustworthy boy on board the ship. In that context, what comes next has a real emotional resonance.

The novelisation is one of the earliest books I remember reading, and one of the best. I credit it for my lifelong fascination with horror, monsters and vengeful ghosts. I loved the scenes of the yeti attacking Det-Sen monastery, the spooky Padmasambvha moving the monsters around like chess pieces, and the cosmic horror of the Great Intelligence. I know now this is just one of a string of stories basically with the same plot, and if it turned up whole it could well be as tedious as The Ice Warriors. I doubt it though: the Buddhist warrior monks are much more lively than the anaemic Britannica Base crew; and in their animalistic fury the yeti are scarier than the Ice Warriors. I suspect, as with The Sea Devils and Battlefield, that no amount of reasoned adult criticism will ever be able to reverse the sheer joy I got from this story as a child.