The episode starts with a rather dramatic assassination attempt on the Emperor, who brilliantly uses Barbara as a human shield while seeming to quite enjoy the resulting carnage. As Nero, Derek Francis has been amazing value for money through these episodes: capricious, with a murderous insanity that’s demonstrated in the opening scene when he stabs a soldier to death for not fighting hard enough. His playful but brutal personality feels like it captures this story in microcosm.

Dennis Spooner has also completely nailed the Doctor. ‘I’ve got a friend who specialises in trouble,’ says Ian. ‘He dives in and usually finds a way.’ Hartnell is brilliant in this episode. Having discovered Maximus’ role in the Nero assassination plot, and learned that he is to be fed to the lions, Spooner has the Doctor make a string of awful puns to Nero about being a ‘roaring’ success – and Hartnell absolutely nails it. Interestingly, when the wordplay really matters, he is absolutely on top of the lines.

After this comic showdown between the Doctor and Nero, the episode takes a bit more of a serious turn. Nero decides to burn down Rome; Ian and Delos rescue Barbara from the conflagration and flee, and the Doctor and Vicki make their own way back to the villa – after the Doctor realises he accidentally inspired the great fire. The mix from the Doctor’s amusement at this, to Nero laughing as the fire rages is probably deliberately disconcerting. Having said that you can’t change a single line of history, having the Doctor inspire history is perhaps a deliberate step towards some of the timey-wimey scripts coming later in the season.

The denouement notably features a bit of blatant flirting between Barbara and Ian before the Doctor and Vicki arrive to discover a blissed-out pair gorging on grapes. It’s a charming end to a hugely enjoyable set of scripts.

Back on the TARDIS, Vicki thinks Barbara is joking about the Doctor’s spurious ability to pilot the Ship. But worse is to come – back in sci-fi territory Hartnell is a lot less sure of his stuff, but finally manages to spit out that the TARDIS is being dragged down. ‘To what?’ asks Ian… 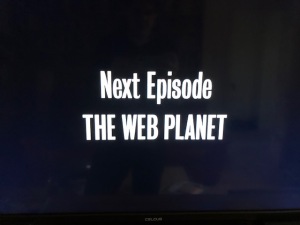