Often praised as being a superior version of the English-language Dracula, Melford’s movie certainly plays less stagebound than Browning’s. While largely following the same beats (by virtue of having to use the same sets) as the English version, there’s enough here to make the film worthwhile in its own right.

Opening to the strains of Swan Lake, but swapping a Bat logo for a cobweb-draped candle, the Spanish Dracula is perhaps more atmospheric. Though our first view of Dracula’s crypt is similar, Carlos Villar’s Dracula seems to be scrabbling like a feral animal to escape his coffin – and throughout, his vampire is a catlike presence: padding through the background of scenes, narrowing his eyes at his enemies, and hissing angrily when riled – quite removed from Lugosi’s suave Count. When Dracula rises from his steaming coffins, he’s lit from below, becoming the kind of vaporous creature at odds with Lugosi’s very solid vampire 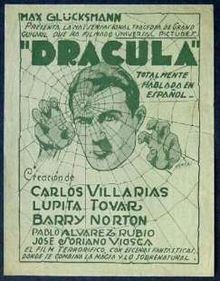 The film also feels a little more full-blooded – rather than nicking his finger on a paper clip, the Spanish Renfield gashes his thumb on a knife, causing blood to gush everywhere. But it’s easy to over-state the differences. Both pictures are very talky – Dracula chatting about renovation plans for his London property makes him seem both modern and middle class. And the middle of the film still suffers from a surfeit of drawing room scenes that are quite static. The climax, too, is altogether too bloodless.

So, while a slight improvement over the English version, this is by no means a classic adaptation, and neither holds a candle – cobweb-draped or otherwise – to Murnau’s guerrilla version of the story.