It’s lucky that this episode exists: trying to understand it from the soundtrack or telesnaps would be hard going, because this is the show’s biggest ‘spectacle’ episode to date, with a huge chunk of the running time dedicated to the pitched battle between the army and the War Machines in Covent Garden.

The first part of the episode is little more than preamble to the battle: a chilling, brainwashed Polly prevents Ben from escaping for a few minutes – before their eyes meet and she lets him get away to warn the Doctor and Sir Charles. They have been spending their time waiting for Ben, and arguing about whether to involve the police. Hartnell appears a little flimsy on his lines, which means the great William Mervyn has to clarify a couple of times in seeming ad libs. Michael Craze on the other hand really goes for it – giving a sweaty, panicky performance of Ben on the verge of hysteria. It all feels very serious.

On the other side, in the warehouse, Major Green acts as the mouthpiece for WOTAN, and for the show’s scientific advisor Dr Kit Pedler, whose fascination with the idea of humanity being subsumed by machines will shortly reach its full realisation in The Tenth Planet, but is obvious here in lines like:

GREEN: There is no time for rest. You must follow the example of the machines…

Later, Green tells Polly, ‘You are an instrument only. You have no friends.’ WOTAN is a less tragic villain than the Cybermen – its plot is simple domination, rather than a desperate survival tactic – but the themes of the two stories are similar, with Polly’s humanity reasserting itself in defiance of machine-like conformity, much as she’ll later defy the Cybermen’s uncaring natures.

About halfway through, the episode then becomes a prototype UNIT story, with rapid shots of the army mobilising and arriving on the scene, preparing for battle, and storming the warehouse. The scale is impressive, and (although some of it has been reconstructed from censor cuts), the action is fast-paced and exciting. In action, the War Machines seem obviously inspired by the movie Daleks, bearing down on their victims and – in lieu of the usual electronic effects – shooting them with smoke guns. Daleks: Invasion Earth 2150 A.D. is only a month away from hitting the cinemas, and I get the feeling that this is the TV show getting in first. 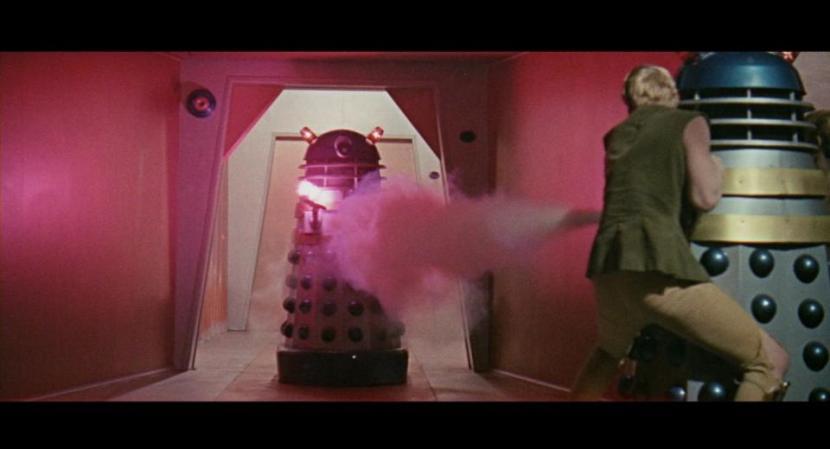 The cliffhanger – in common with the last two – is brilliant: as everyone else runs for cover, the Doctor steps forward to face the War Machines. At around this time, Hartnell was in discussions with Innes Lloyd about relinquishing his role. Knowing this, there’s an added poignancy in the episode’s final image of the first Doctor, staring defiantly out at us, alone, unarmed, but absolutely indomitable.

Next episode: The War Machines – Episode 4