Ben and Polly have stumbled into the TARDIS, and the Doctor is furious. For the first time in forever he thought he was going to be alone again, and now he has two more young people to worry about. Perhaps they’ve caught him off guard, or maybe the audience just need a refresher after the two-month gap since The War Machines 4 aired, but the Doctor is surprisingly forthright about what they’ve got themselves into:

THE DOCTOR: I have no control over where I land. Neither can I choose the period in which I land in

Whatever the reason, the Doctor quickly comes round to the idea of having some new fellow travellers, delightedly declaring, ‘I can foresee oodles of trouble!’ The TARDIS has materialised in a cave on a beach, which Polly perceptively identifies as Cornwall. She’s not wrong: I’ve been there: 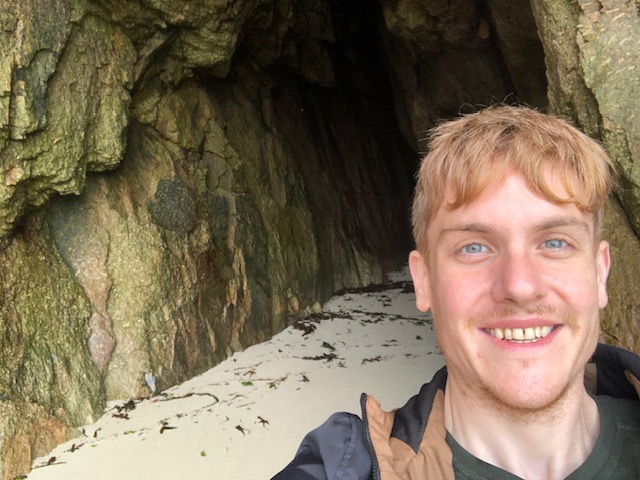 This quickly develops into an adventure-serial historical, full of muttering yokels and melodramatic secrets. Just as Polly and Ben’s act of kindness – returning the Doctor’s spare TARDIS key – got them into this, so the Doctor’s act of kindness fixing a cantankerous churchwarden’s dislocated finger drags him into the plot. Hartnell and De Marney (as the churchwarden) fluff their way through the dialogue, but De Marney does manage to spit out his final secret – Deadman’s secret key – which is the MacGuffin that drives the rest of the episode’s story. And as this is written by The Celestial Toymaker‘s Brian Hayles, that secret comes in the form of an indecipherable riddle.

This is all fairly fast moving and inoffensive, and Ben and Polly are a fun new pairing – good-naturedly ribbing each other (‘Bell-bottom sense of humour!’, ‘Dolly-rocker duchess!’), and reacting credibly to everything that’s thrown at them. While hardly sparkling with wit, the script does have an ongoing joke of people being ordered to talk and then ordered to be silent. And it finishes with the Doctor on board a pirate ship with a spike-handed captain, which is pretty attention grabbing.

However, the most noteworthy thing about this episode is that it was the first to be broadcast after the announcement that William Hartnell was being replaced by Patrick Troughton as Dr Who. Hartnell’s departure was reported on 6th August, and Troughton’s appointment on 1st September – just over a week before this broadcast. You’d imagine people tuning in out of interest. But even the mix of this news and the launch of a new season weren’t enough to nudge the viewing figures upwards. With 4.3 million viewers, this was the least-watched episode to date.

Next episode: The Smugglers – Episode 2