What has happened to the Doctor? That’s the question vexing Polly and Ben, as they confront the weird stranger in the TARDIS. They, and we, don’t have much more idea by the end of the episode than at the start. If anything, the episode goes out of its way to be disconcerting and strange, making the programme seem mysterious.

The new Doctor is a slippery customer – which irritates Ben and intrigues Polly. We’re immediately wrongfooted when, with a wolfish laugh, he declares, ‘It’s over.’ He has a hint of the old Doctor’s brusque authority, ordering Ben to ‘Hold that!’ and Polly to ‘Come here!’, but none of his gentleness. He doesn’t call Polly, ‘My child’ or giggle to himself. Instead, he growls to himself, ‘Extermination’ and ‘Alien. Very alien’, when he discovers Dalek artefacts. There are no outraged harumphs when he meets the overbearing Governor Hensell. Instead, he confides his suspicions about Bragen to Ben and Polly, suggesting a more calculating, deliberative thinker than the impulsively brilliant first Doctor. These things, and his tendency to refer to ‘the Doctor’ in the third person, are enough to leave us with some doubts about him – although the fact the old Doctor’s reflection appears in his mirror, and that we see he wasn’t responsible for the death of the Earth Examiner, mean that there’s no real doubt that he is what he claims to be: the Doctor renewed.

At the same time, he looks and behaves like a fool. The first part of the episode sounds like it was filled by Anneke Wills and Michael Craze reacting to Troughton’s more  physical performance as he stumbled around the console, and roots through the treasure chest to uncover relics of past, David Whitaker-penned episodes. He dances a jig, tootles on the recorder, and seems to do a Buster Keaton comedy routine in the mercury swamp, miraculously avoiding one to slosh in another. And while he may have been renewed, his clothes have deteriorated to a bizarre parody of the Doctor’s – everything the wrong size, or dishevelled. With unruly hair, enormous trousers and an absurd hat, he looks like the ‘Cosmic Hobo’ of fan legend. This is an odd version of the second Doctor now lost to us thanks to the destruction of his first three months’ of episodes. The more familiar version looks almost as different as this does to Hartnell. 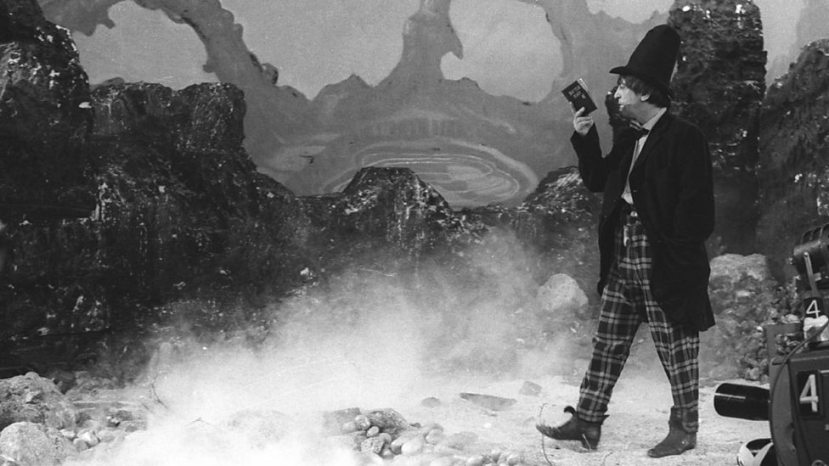 Wisely, Whitaker doesn’t over-burden the episode with too much plot, allowing us time to acclimatise to a new Doctor. The story so far is simple: a mysterious capsule recovered from the swamps, and a colony in crisis. And, at the end, the Doctor’s arch-enemies, looking as flea-bitten as he now does. This is very carefully constructed to hold the Daleks back to the end not as a ‘surprise’, but to keep the audience in anticipation, in case the intrigue of a not-immediately likeable new Doctor isn’t enough.

I can sympathise with that. Having now watched 134 episodes of William Hartnell’s Doctor, Troughton’s Doctor is not an easy sell. He isn’t instantly charming. Comparing my earliest memories of Troughton – predominantly from The Five Doctors and The Mind Robber VHS – to his performance here is like comparing Hartnell’s mature performance in The Gunfighters to his first appearance in An Unearthly Child. Both characterisations are initially quite challenging, and distant. If I didn’t know what was coming, I’d be getting a T-Shirt emblazoned with ‘Come Back Bill Hartnell, All Is Forgiven..

Next episode: The Power of the Daleks – Episode Two