The point is laboured in the climax: ‘Wait, it says! Wait!’ screams Walters as the computer continues to stall for time. (Poor Walters: conscripted into Britannicus Base, driven to distraction by all the faffing around, and finally shot by both his own side and the Martians). Later, Varga cautions his warriors to wait for the power to increase before attempting take off. But the day is saved by those who, like the Doctor, believe, ‘We’ve got to take some action!’ Which in practice means watching Peter Barkworth and Wendy Gifford moaning piteously as the great and powerful computer spins round and round and Peter Sallis presses some buttons. At which point even Derek Martinus seems to throw in the towel.

The things that make this perhaps the show’s weakest story to date all boil down to Hayles’ script. There’s probably enough material in it for a tolerable four-part story, but stretched across six, this is horribly thin. Thematically, it’s equally threadbare, boiling down to Penley declaiming that the essence of man’s progress is taking risks. Clent and Varga’s risk aversion condemns them; Penley’s willingness to take a calculated gamble makes him the hero.

Hayles is less interested in the regulars than he is his own characters. The Doctor’s main contribution to the story is sabotaging the Martian sonic cannon to save Britannicus Base, while Jamie and Victoria get next to nothing to do (Hines spends half the story lying in bed). Sadly, even the original characters aren’t very good. I’ve already commented on Hayles apparently losing track of Garrett’s motivation; Clent is such a by-the-book idiot Peter Barkworth has to ham like mad to give him a bit of life; Storr is thick as mince. Only Peter Sallis as Penley gets anything like a real character to play, and his is the standout performance. 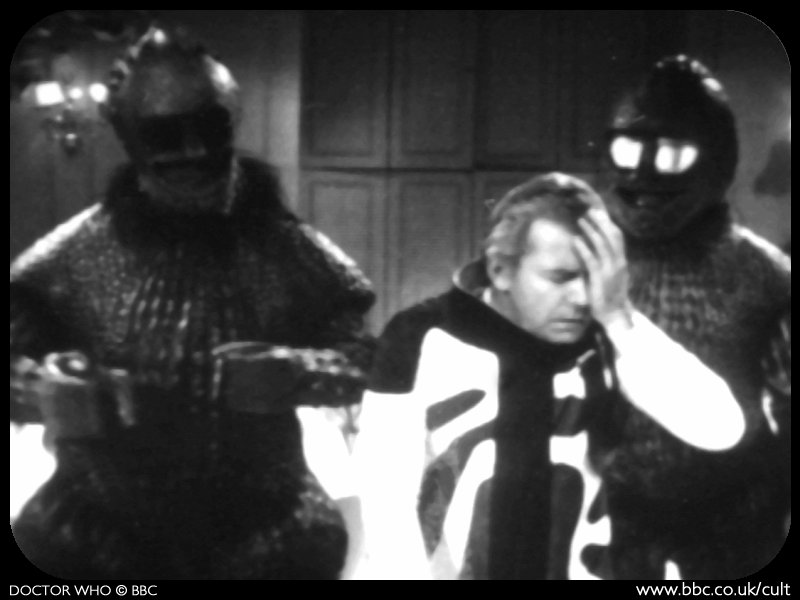 Plus, the Ice Warriors are pretty useless: Varga gets defrosted, wanders back to his ship for three episodes of whispering, wanders back to Britannicus Base because he’s been tricked by the Doctor, then goes back to his ship to get blown up. There’s the decent sequence in Three of Victoria being stalked through the glacier, but there’s nothing to make this more effective than with a Yeti or a Cyberman.

So despite having one of the show’s best directors, a good cast and plenty of expensive-looking film sequences, The Ice Warriors doesn’t work at all. So far on the pilgrimage, these episodes are the first that have been a chore to sit through.

Next episode: The Enemy of the World