This is shot like a spy thriller, going for realism, roving cameras and location filming in grotty, industrial locations, with sparse, urgent musical cues. The Doctor and Jamie get brought in by a suited Benton. There are surveillance photos of key characters (a far cry from the publicity shots they’ve used in the past – for example in The Evil of the Daleks). It’s all very hard edged.

Except it obviously isn’t because Patrick Troughton is playing the Doctor, and there’s no way you can sustain a grim and gritty narrative while he’s playing cards, asking the Brigadier for a patty cake biscuit, stealing Isobel’s sandwiches and mucking about with Jamie. I get the sense that Troughton is doing his best to make what could be quite a distant, sombre story about men in suits accessible and fun for the kids. Hines is on the same page as Troughton, desperate to show off his new personal stereo to the Brigadier while the Doctor tells him to put it away, and later getting antsy as the Doctor dismantles it.

The reappearance of Courtney as the Brigadier is a nice call-back to The Web of Fear: it’s the character we’ll come to know and love, twinkle in his eye, indulgent smile as he deals with the Doctor. He’s already slotting into his role as the straight man to the Doctor, providing exposition, asking questions for the audience, and helping to move the plot along where necessary. He doesn’t get loads to do in the episode, but he’s immediately differentiated from most of the authority figures the Doctor meets because the Doctor likes and trusts him. 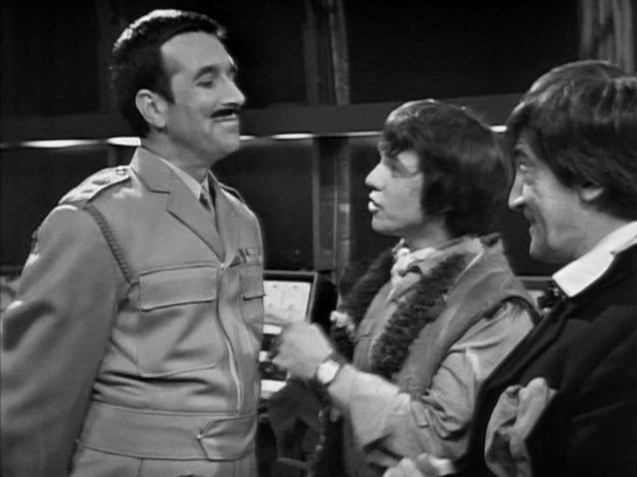 His old nemesis from The Daleks’ Master Plan, Kevin Stoney, is great as Vaughn. His amused reaction to Zoe and Isobel blowing up the reception computer is magnificent. In reality, the character isn’t a million miles from Mavic Chen in a business suit: arrogant, sardonic and in league with something alien (that has what looks like a breathing tube bobbing up and down inside it, implying some grim organic component).

The character I sympathise most with though is Gregory – a man whose plan for a fairly relaxed day ruined is by a demanding boss.

Next episode: “The Invasion” – Episode 3