Milo Clancey is a typical Robert Holmes character: slightly larger than life, garrulous, cranky and amusing. His ship, Liz 79, is as decrepit as the TARDIS (he has to bash it with a spanner to make it go), and the universe seems to be conspiring to ruin his breakfast. His presence lifts what is otherwise a fairly grim episode, and signals clearly that this is meant to be the Wild West in space. He’s dressed as a prospector, has a terrible American accent, and has a very Holmesian disrespect for authority and bureaucracy, taking the mickey out of ISC’s fancy ship, bashing government interference in the affairs of small businessmen, and criticising the waste of public money on the space beacons. He’d probably have voted Trump in 2016. 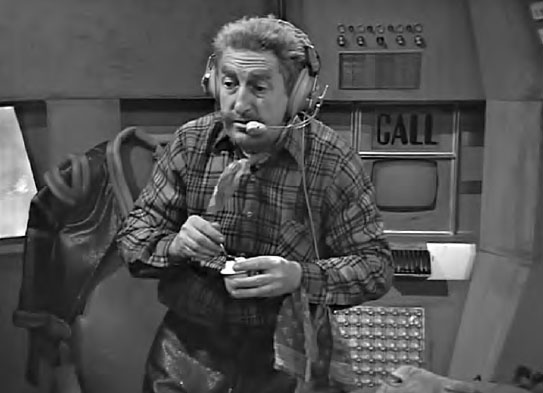 Clancey’s arrival distorts the shape of the story – which was previously set up as a fairly straight space drama. There are still elements of that here: Hermack going to Ta to meet Madeleine Issigri and chat about her argonite mining company is very Power Game. And it’s nice to see another woman in a position of power – the Troughton years are scoring surprisingly well on that score. Meanwhile, the Doctor, Zoe and Jamie have yet to enter the plot proper, but their scenes – trapped with a diminishing air supply aboard a fragment of the exploded beacon – are rather more subdued than usual. Troughton gets one funny line – ‘I’ve got a screwdriver!’ – but mostly it’s all quite grim. Having botched his plan, the Doctor can only look defeated and quietly berate himself as a silly idiot, before the three companions collapse, to die together as the air runs out.

The only thing that isn’t grim is the costume design, which continues to be both courageous and outrageous. Madeleine and her female staff have metal hairdos, presumably the futuristic version of periwigs, and Warne wears what looks like a repurposed Ice Lord helmet. If he were around to see them the Doctor would surely be declaring he’d like a hat like that. However, Troughton’s looking as dishevelled as in his first story – a massive hole in the right knee of his trousers, and his coat falling to bits, he really has started to look like a cosmic hobo. Which puts him firmly in the same camp as Clancey, who looks equally shabby. Though they’ve yet to meet, their attitudes to authority and fashion suggest they’ll be firm allies.