The episode opens as the Doctor is saved from the British by a German sniper – a beautifully subversive touch from Malcolm Hulke and Terramce Dicks. Later, Jamie makes common cause with a Redcoat who’s wandered in from another zone which, given the last time he encountered one in the Land of Fiction he immediately tried to kill him, must count as an improvement. The theme of the serial, that soldiers should unite and stop being used as pawns by the authorities, is one the show will return to 20 years and one world war later in The Curse of Fenric, but its most elegant encapsulation is here, where the Highland rebel joins with the British soldier.

The idea that blindly following orders is wrong keeps cropping up through the episode. There’s a magnificently funny sequence where the Doctor impersonates an official from the War Office (with his secretary Miss Heriot) in order to “inspect” the military prison where Jamie is being held. He berates every soldier he meets, and as they’ve been conditioned to obey barked orders, they give in to his every demand. Elsewhere, Lady Jennifer and Carstairs have been affected by their acquaintance with the Doctor, and, like the Human Daleks, have started to question their orders, and thus break their conditioning. It’s a nice moment that sums up the subtle power of Troughton’s Doctor. 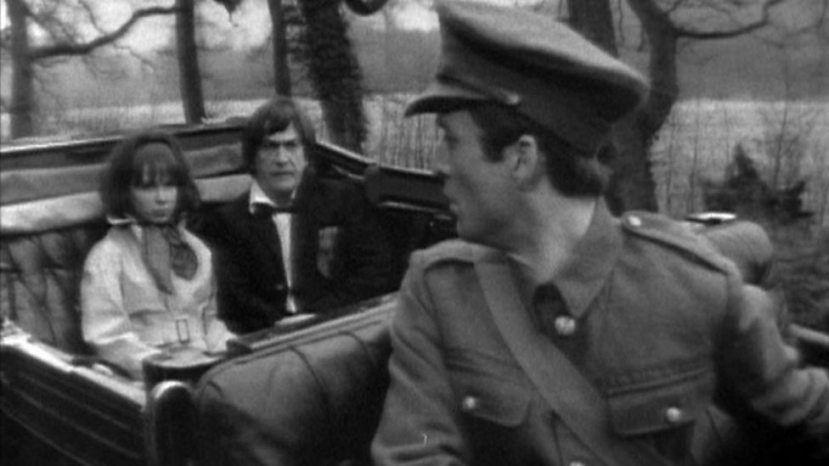 Though the serial is two episodes longer than The Invasion, it’s moving a lot more briskly. By the end of this episode, the Doctor knows that there is something very unsettling going on; he’s aware that someone is meddling with time, and he’s not willing to walk away without stopping whatever scheme is going on. Also, he feels a moral obligation to Lady Jennifer and Carstairs – as Zoe says, ‘We can’t leave these people now.’

The mystery deepens as Lady Jennifer and Carstairs begin to break their hypnosis, and realise they’ve been abducted. As their conditioning fades, Smythe’s hidden futuristic technology becomes visible to them. But in a scary twist, they also become visible to Smythe – framed like a spider behind a glass panel covered in a web-like map. Smythe has already travelled to his mysterious HQ in a strange transport that vanishes a bit like a TARDIS. While not quite Tobias Vaughn great, he’s a brilliant villain: huge mutton chops, malicious expression, squinting eyes, rasping voice that always sounds like he’s on the verge of bursting into a full-on Emperor Palpatine cackle. Although why he doesn’t get a lock fitted to his bedroom given his troops keep blundering in is anyone’s guess.

The episode ends with the arrival of the escaping friends traversing the barrier of mist to arrive in another zone – where they’re attacked by a Roman legion. This is one of the most intriguing stories so far.