If the first episode established tone and mood, this episode starts to throw in various random bits of weirdness that continue to build the sense of the uncanny at the expense of actually doing much to advance the plot. By the end of it, the Doctor and the Brigadier know the Master is involved, somehow, but they haven’t actually met him, and his plan remains fairly obscure. There are an animated gargoyle, a 30-foot devil, a model spaceship that weighs 740 tons and a heat barrier surrounding Devil’s End, but, other than the fact that they all seem to be centred on the barrow, we have a lot of jigsaw pieces without the box.

That’s fine, given how swiftly the episode moves from moment to moment. The UNIT boys have been watching the football, but they tune in to BBC3 to witness last week’s cliffhanger and immediately rush to the rescue in the Brigadier’s helicopter (to his irritation). It’s nice to see Yates and Benton dressing down and getting to take the initiative rather than following orders, and John Levene gets his best moments to date, rescuing Miss Hawthorn and wrestling with a murderous verger in the crypt before being psychically attacked. 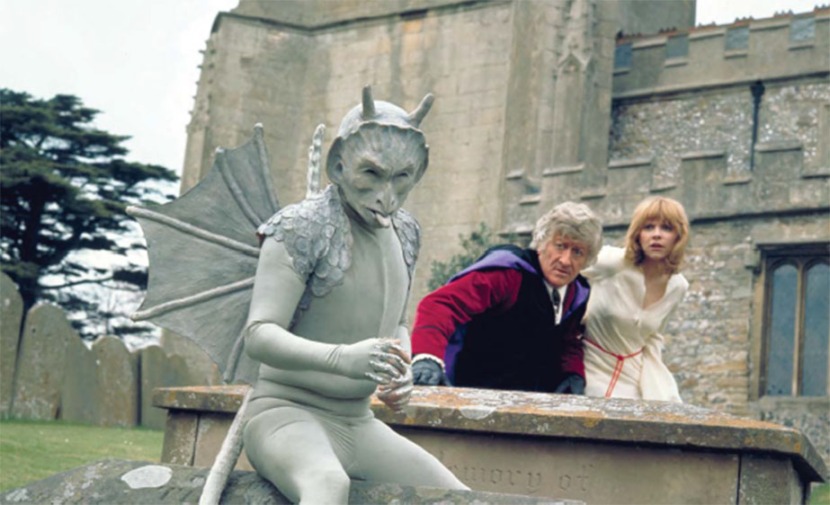 In between this and the Brigadier exploring the extent of the heat barrier, neither Pertwee, Manning or Delgado get an awful lot to do. But that’s ok: there’s plenty to like about the episode, including some proper night filming, and some neat details like the made-up road signs (to places like Satanhall), the sign of the Cloven Hoof pub, the care taken to establish Bert the Landlord as a wrong’un, and the first ‘did you fail your Latin, Jo?’ exchange when it turns out Magister is the Master.

Next episode: The Dæmons – Episode Three