The Dæmons continues to crash different genres of horror together in quite an effective way. There’s something a bit Devil Rides Out Hammer Horror about the Master’s consciously retro chanting as he summons up the devil in amongst fire and brimstone. Up above, the Doctor is faced with much less supernatural, and therefore more terrifying horror as the ugly side of rural traditions surfaces in a way that’s totally Wicker Man. The way several villagers snatch in their children and slam their windows shut as the Morris Dancers arrive is quite creepy: like the locals know this is not, as Miss Hawthorn suggests, just a charming ritual, but represents something repressed and sinister. The increasingly violent beatings and threat to burn the Doctor alive are very dark indeed. 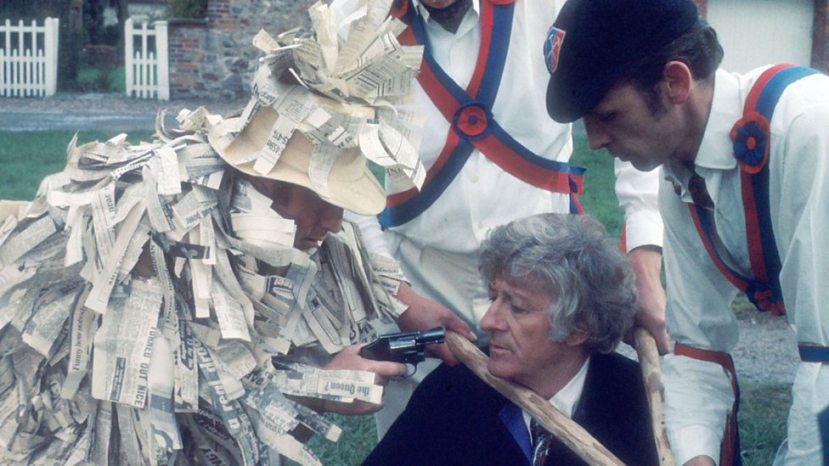 Co-writers Barry Letts and Robert Sloman don’t seem to have entirely worked out the story, but they throw in so much atmosphere, and so many brilliant one liners for a seasoned cast now working at the top of its game that it’s easy to overlook. Cut off from the action, the Brigadier declares, ‘You know sergeant, I sometimes wish I worked in a bank.’ The Doctor gets to tell Osgood to ‘reverse the polarity’ as he stands, issuing instruction, on the other side of the heat barrier.

And even the minor characters are vivid and entertaining. Miss Hawthorn’s crush on Benton is lovely, and her plan to ride to the Doctor’s rescue is inspired. Alec Linstead is so perfect as the put-upon Osgood that he’s memorialised in the new series. And Bert the Landlord is great as the little man with ambition beyond his capacities, an easy mark for the Master. Christopher Barry directs it with verve: the release of heat as Azal disappears is brilliant – it looks even more apocalyptic than the end of the world in Inferno (although why there’s no corresponding rush of freezing air accompanying Azal’s arrival, as in the first episode, is unexplained).

In short, it’s easy to see why this made such an impact on both the cast and viewers. Which makes it a shame that so much of this feels like a string of logic leaps and non sequiturs. The Master’s first conversation with Azal is bafflingly all over the place. One moment Azal wants to speak to the Doctor, then he doesn’t. He suddenly declares the Earth ‘smells of failure’ (as if he watched the Doctor’s slide show in the previous episode), and warns the Master to ‘remember Atlantis’ as though Letts and Sloman had a list of things that he needed to say without giving him any reason for doing so. This is definitely one to watch for the atmosphere and one-liners.

Next episode: The Dæmons – Episode Five