The mystery plot is resolved within the first minute: Arcturus was the traitor helped by Hepesh, who is trying to stir up interplanetary war. As a result, there’s a little less creeping around corridors and caves than the last three episodes, as this instead focuses on Hepesh’s palace coup. It’s all very sound and neatly ties up all the loose ends (including the Doctor’s control of the TARDIS, which he now believes was engineered by the Time Lords) at the expense of some of the colour of the earlier weeks.

What we do get is an increased focus on the third Doctor’s little homilies: ‘It’s not easy to be a king’ he tells Peladon, as he encourages him to break free of over-reliance on advisors and take the lead. The story of the callow princeling becoming a true King is a bit hoary, but it’s not one the show’s tried for a while and it polishes up ok.

It’s also indicative of the more thorough than usual character work, with the King and Jo getting a final scene together that’s beyond the normal “Thanks, bye” ending, and suggests Jo is genuinely torn about becoming a Queen of Outer Space. Her subsequent dialogue with the Doctor is sweet, and Pertwee and Manning play it beautifully, including an uplifting bit of business about Queen Victoria’s coronation. The two of them share an obvious connection that’s compelling to watch. 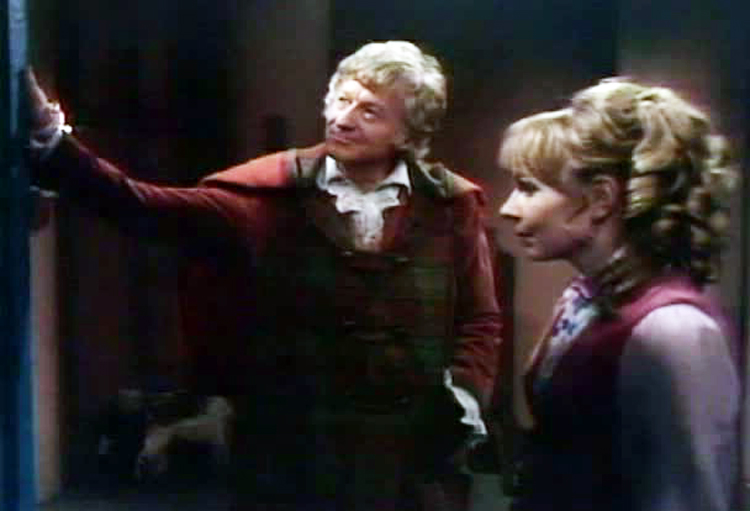 The joke of the real Earth Delegate arriving tops a story that has its problems (like every Hound of the Baskervilles ever committed to tape, Aggedor looks unimpressive in the flesh, although that might be the point – the superstition is more frightening than the prosaic reality) but is easily the best script with Brian Hayles’ name on it. I have a lasting affection for this serial for two reasons. Firstly, the novelisation, like so many of the early third Doctor books, was a childhood favourite. Second, it’s one of the earliest stories I caught a glimpse of when it was repeated as part of the Doctor Who and the Monsters season in the 1980s. I can vividly remember the title sequence and opening scenes before I was rapidly dispatched to bed as it was “too scary”, which set Doctor Who in my mind as something slightly forbidden and exciting. And look where it’s got me.

Next episode: The Sea Devils