This opens with two weary space pilots having a conflab about current affairs and how tough their jobs are, exactly like every other Doctor Who story for the next 16 years. Here, though, it feels like a novelty: it’s so long since we’ve seen anything like it, or had two consecutive serials not set in contemporary Britain. And then they nearly collide with the TARDIS in hyperspace, establishing the new normal so comprehensively it feels quintessential. Possibly as a running joke, it turns out that the TARDIS has landed in yet another storage hold, and Jo’s relatively blasé reaction establishes her increasing familiarity and comfort with space travel, as part of a low-key but admirable effort to give her a bit more character development than most previous companions. I particularly enjoyed her sarcastic ‘fascinating’ when the Doctor is giving a scientific explanation. 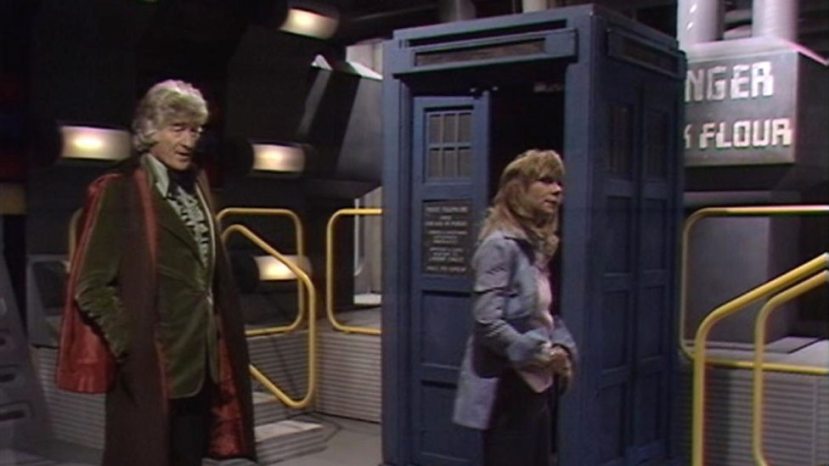 It’s equally interesting to see Pertwee seem so at home being William Hartnell and deciding he needs to check his calculations to reprogram the TARDIS. Given he was hired by Sherwin to be the kooky Earthbound Doctor, he looks very much at home in this consciously 1960s retro setting, in a story apparently inspired by memories of The Daleks’ Master Plan. He also gets a pure Tom Baker moment, breaking out of a cell just as Hardy the space trucker is outside the door: ‘Oh, how very embarrassing. Good afternoon.’

While the Doctor and Jo are pretty much confined to the cargo ship, wider events are in train: a cold war between the two 26th Century superpowers of Earth and Draconia. This premise is very Star Trek, but the way it unfolds – with scenes on Earth between Madam President and the Draconian Ambassador, and news reports of escalating skirmishes (plus glorious, world-building snippets about limits on the number of children, and the reclamation of the Arctic to set up New Glasgow) give this a broader feel than 1960s Star Trek, which would have info-dumped the situation in a briefing by a Starfleet admiral, and confined events to the Enterprise and possibly one Earth-like planet.

I think this is a cracking first episode. It has political intrigue, good jokes, memorable characters and monsters (the Draconians, or “Dragons”, look superb with their great half masks, plus we have Ogrons and Drashigs both back from the previous story). The direction, by Paul Bernard, is pretty vanilla, but I suspect he was a safe bet having done the Daleks and Ogrons in Day of the Daleks, and the Master in The Time Monster.