The Latep/Jo relationship sums up Planet of the Daleks. It’s oddly cursory, it comes out of nowhere, lasts just long enough to make a point, and is then over and done with (Latep takes the whirlwind, one-episode romance very stoically as he waves a cheery goodbye and heads back to Skaro). It’s almost like a pastiche of what Terry Nation remembers about the 1960s episodes and Susan and Vicki’s shotgun marriage departures.

Which is Planet of the Daleks all over: an effective but vacuous pastiche of an older way of making Doctor Who, lacking some of the wit and regular characterisation that have been developing under Terrance Dicks and Barry Letts. It’s a success because it’s enjoyable and entertaining, and gives us the best Daleks we’ve had since 1967. The Dalek Supreme is a particular highlight: decorated in 1970s prestige black and gold, like a fancy cigarette lighter, with glam flashing ear bulbs and eyestalk (which sadly don’t sync up with it’s talking) it’s brilliantly TV Century 21, completely no nonsense and intolerant of failure, executing it’s excuse-making subordinate and declaring that the Daleks can never be defeated. 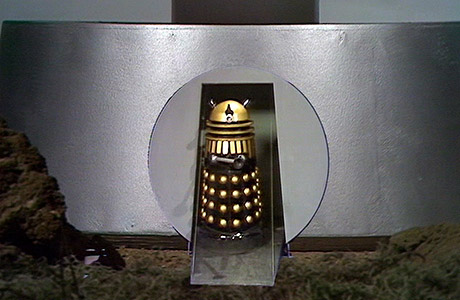 It also contains some good action and suspense scenes, such as this episode’s sequence of the Thal bomb falling into the midst of a bunch of groggy, reawakened Daleks. David Maloney’s direction, while not as impressive as his later work with Philip Hinchcliffe and Robert Holmes, is as solid as you’d expect. Fair enough, some of the Doctor’s cliched wisdom is a bit dull, but on almost every level this is superficially getting it right. The problem lies with the script, which lacks the giddy excitement of The Dalek Invasion of Earth, or the wryness presumably Dennis Spooner and Kevin Stoney brought to The Daleks’ Master Plan. It’s very much Mission to the Unknown with added Pertwee. As such, there’s almost nothing beyond what’s presented on screen; no subtext; nothing for any of the cast to play with. And with the downbeat ending of a dejected Jo asking to go back home to Earth the result is, surprisingly, the most dour story of the colour era so far.

Next episode: The Green Death