The logical climax of this story is much more convincing than Robert Sloman’s last two scripts, with the first half focusing on ending the threat posed by the giant maggots (and, oh dear, the giant fly) and the second switching to defeating BOSS’s plans for global domination. As a result, there’s an unflagging pace, helped by holding back the meaning of Professor Jones’s mysterious declaration of ‘serendipity’. The neatness of the script is reflected both in the method of defeating the maggots (the edible fungus that’s been a running joke for the last five weeks), and in the Doctor’s appeal to Stevens’ humanity which is vital in foiling BOSS (‘sentimental friend,’ the dying computer proclaims, having called him a ‘sentimentalist’ back in Episode Three). All this is wrapped up in Jo’s departure, which has been seeded since practically the first scene.

Realisation is also generally very strong: the Doctor and Benton driving round the slag heap throwing the maggots baited fungus is interspersed with some truly horrid shots of the creatures squirming and munching. And while the giant, goo-spitting fly isn’t one of the classics, it’s only in this briefly before being dispatched, rather nicely, by the Doctor’s dog blanket cape (‘beautiful creature,’ he eulogises over its broken corpse). The set pieces all work, but there’s also a lot of nice business between the actors that suggests this was well rehearsed: handing a plate of fungus from person to person until Benton’s left holding it; Stevens’ almost balletic spinning around BOSS’s control room as he prepares to connect to the ‘seven international computers’, and most impressively, the performances at the conclusion.

While it’s a bit of a shame Katy Manning is reduced to wringing her hands at Professor Jones’ bedside in her last episode (maybe in compensation, Nancy proves more than capable of mixing up and administering the Doctor’s vaccine: ‘I can do that. I’m not just a mum here, you know’), Jo’s devotion to Cliff, and her expression of doubt in the Doctor (‘Even he doesn’t know what to do’) lead inevitably to her decision to remain with the Professor. This means the Doctor, beautifully, having to extract himself from the middle of the marriage proposal, like a father “giving away” his daughter.

The final scenes are heartbreaking, not necessarily a quality Doctor Who has previously pitched for or really achieved. Jo’s little kiss for the Brigadier, and the Brigadier’s consolation of Yates about his non-existent romance with Jo: ‘Never mind Mike, let’s have a drink’ are small but perfect, as is her last conversation with the Doctor, stolen in a corner. Manning is excellent, a little sad look over her shoulder at the man she’s leaving behind, before she looks to the future with Cliff. But Pertwee is even better, without needing to say a word his sadness is tangible and very touching. His performance here is as strong as anyone has ever been as the Doctor. The sequence of him starting up Bessie and driving off into the night should make the stiffest of upper lips wobble. The Green Death balances structure, action and genuinely touching moments in a way that’s become the norm for Doctor Who since 2005, but is a bit of a high water mark for the classic series. 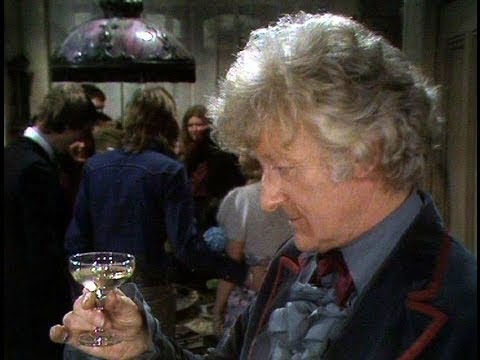 Season 10 is a near-perfect anniversary season, nostalgic, but confident in the current incarnation of the show. Bringing back Hartnell and Troughton is lovely, but perhaps even lovelier is the ability to put these characters back in their box and move on in a way that the series increasingly struggled to do after the 20th anniversary. I like thematic move through the Mind Robber-ish ‘oddball’ of Carnival of Monsters and the Daleks’ Master Plan space opera of Frontier in Space and Planet of the Daleks to a Jo Grantified take on Season Seven in this story. There’s no sense of closure, only of new horizons and adventures.

Next episode: The Time Warrior