This continues to be Robert Holmes’ funniest script to date. Bloodaxe, on first impressions a Baldrick type figure, slyly mocks Irongron’s pretentions: ‘Tis a cunning plan, Captain… Yours is indeed a towering intelligence’. Holmes even dares to poke fun at Pertwee (‘A long-shanked rascal with a mighty nose’), and while some of the quips about the ‘fair sex’ are a bit cringey nowadays it’s notable that Sarah is both willing to admit when she’s wrong, however grudgingly, and continues to be a driving force behind the fight against Linx and Irongron, leading the raid on the castle to capture the Doctor, and convincing Sir Edward and Lady Eleanor to give him a fair hearing.

The Doctor repays Sarah by being more immediately candid about himself than with any previous companion. Holmes drops in a lengthy and brilliantly handled exposition scene that essentially conveys the Doctor’s backstory to Sarah (and the audience) concisely and wittily, and includes some of the most quotable lines of the era. Admitting his extra-terrestrial origins and describing the Time Lords as ‘Galactic ticket inspectors’ is as sweet a “moment of charm” as any with Jo:

SARAH: Galactic ticket inspectors? Oh, I could murder a cup of tea. You’re serious, aren’t you?
DOCTOR: About what I do, yes. Not necessarily the way I do it.

The partnership between the Doctor and Sarah is emphasised in their costumes: a matching green and brown colour scheme, and monks’ habit disguises (amusing that the Doctor has stolen another Time Meddler’s outfit for this subterfuge) that fool the most am-dram performer (the guard) in the entire series. 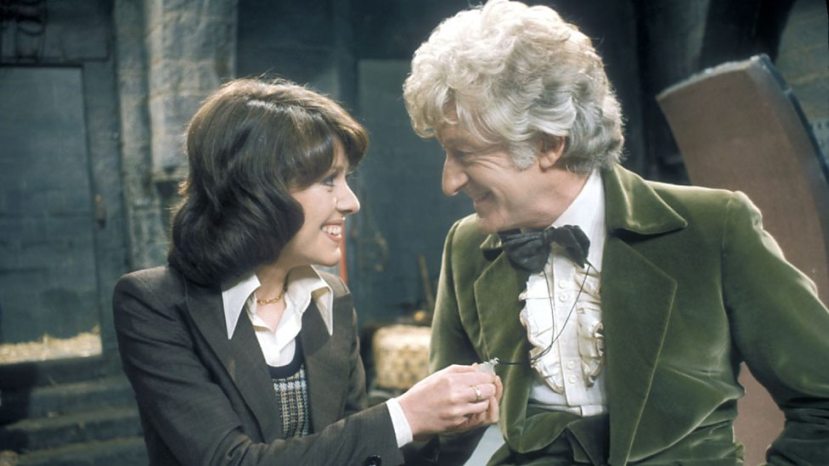 While the Doctor and Sarah are growing closer, Linx and Irongron’s alliance is falling apart. The Doctor’s arrival has driven a wedge between them, which is widened when Linx, whose ‘eyes have a thirst for blood’, has a hissy fit when he’s denied the spectacle of a massacre at Sir Edward’s castle. The Doctor has cleverly cobbled together a defence plan: one of my favourite scenes of all Doctor Who is Pertwee merrily chucking stink bombs over his shoulder while Sarah excitedly jumps up to see over the battlements. It’s the perfect illustration of the Doctor’s point about not being too serious about the way he does things.