There hasn’t been a serial that unfolds with such grim inevitability since The Massacre. Even though the Kaled Council listens politely (more politely, to be sure, than the usual reception the Doctor gets when he claims to be a time-travelling alien from the future) to the Doctor’s Cassandra-like warnings, they refuse to take the definitive actions required to stop the Daleks, and so seal their own fate. They fatally underestimate Davros’s commitment to their cause – as was made clear in the previous episode, he has long ago abandoned hope for his former people. He now commits the ultimate betrayal, colluding in the genocide of the Kaleds so that the Daleks can emerge triumphant.

The politics in this are beautifully nuanced. For example, General Ravon might not be a Davros loyalist, but he’s still a Kaled jingoist, ranting about their impenetrable dome. Meanwhile, the grey old men leading both the Thals and Kaleds are easily duped by Davros, who offers them exactly what they want in the moment. To the Kaleds, Davros seems calm and reasonable, promising to co-operate with the enquiry into the Dalek project. To the Thals he presents himself as dedicated to peace at any cost. In reality, to even Nyder’s evident disquiet, he announces, ‘The Council has signed the death warrant of the whole of the Kaled people.’

It seems the Doctor has failed – but perhaps this is the moment history is changed – not because the Daleks’ creation has been delayed or averted, but because the Doctor’s interference means Davros’s plans have to be accelerated. Nyder is worried that the Daleks are erratic and unstable, and Davros tells him, ‘They will not be allowed self-control. I will prepare a computer program that will limit their actions.’ Maybe this is the source of their robot-like dependency on Davros evident in Destiny of the Daleks and, to a lesser extent, later Dalek stories. 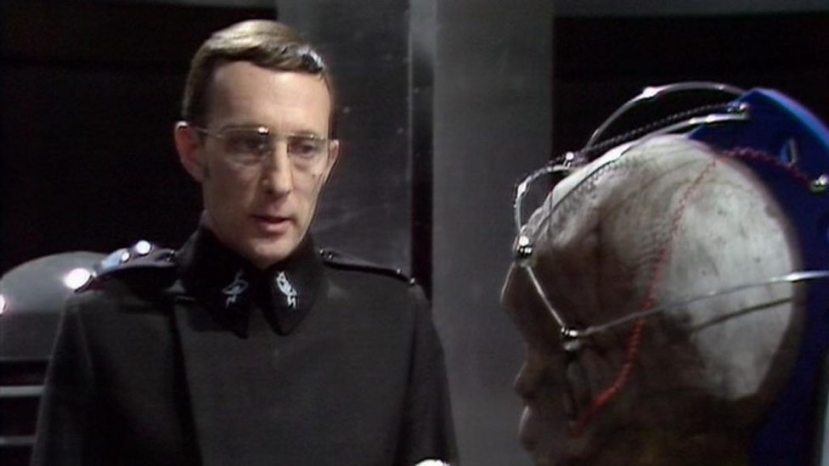 This is filled with meticulous performances. Michael Wisher’s Davros is unnaturally still for the most part, talking softly and reasonably, only tapping a finger when he’s agitated, or, when necessary, provoked into ranting megalomania. Tom Baker gives his most assured performance yet, playing the jokes beautifully (‘Excuse me, can you help me? I’m a spy’), but evidently troubled by the seriousness of the situation and the scale and ethical implications of the Doctor’s mission. Elisabeth Sladen’s plays Sarah’s terror and perfectly, especially in the moment she has to leap across a chasm (in a moment that is incredibly Terry Nation, not least in the fact that the escape achieves nothing and she and Sevrin end up recaptured). And Ian Marter almost saves the doomed moment of the mutant clam attack.

Next episode: Genesis of the Daleks – Part Four