The episode plays out with the Doctor and Sarah Jane as witnesses to the end of an ancient feud between two alien rivals. It’s rare for the fourth Doctor to seem quite so passive: Baker’s performance becomes almost Troughtonish as he stands back while the regenerated Eldrad spills the beans about his deadly rivalry with King Rokon. The expression on Baker’s face, the little understanding nods he gives as Eldrad rants, wails and snarls, are pure second Doctor versus Zaroff. As is the ruthlessness with which he dispatches the ‘king of nothing’.

If anything, you’d expect the Doctor to be furious given he’s been used both by Eldrad herself, whose sob story of warring aliens turned out to be a pack of lies, and by Rokon, who’s engineered a series of traps that lead the Doctor, inexorably, towards acting as Eldrad’s inadvertent executioner. But he seems remarkably cool about the whole affair. ‘We’re well out of that,’ he remarks, as if getting embroiled in the petty feuds of tyrants is beneath him. Or maybe he’s talking about the design work of Kastria, which, in an early example of Graham Williams era chic, includes a purple stool decorated with green wrapping paper.

The Kastrian plot is ultimately very thin. It’s the kind of thing that would have worked nicely as a 50-minute episode of Star Trek, but can’t really sustain four episodes. I suppose the real interest of this is Sarah Jane’s departure. This was reported in the newspapers, and the script leans into this audience foreknowledge by having Sarah threatened with death by gassing, being crushed, and plunging down a chasm. While superficially all the Kastrian traps seem set to kill Eldrad, Sarah’s the real target we’re worried about. But they’re just toying with us.

Her actual departure is much stranger: put off the TARDIS so the Doctor can return to Gallifrey. We can theorise this is because the last time the Doctor took his friends to Gallifrey it didn’t end well for them (putting a different spin on the Doctor’s line, ‘Don’t you forget me’), but it’s not really played that way. It’s not really explained at all, which sort of works because it makes Gallifrey seem immediately mysterious and dangerous. But even though it’s shot as a goodbye, there’s no sense of closure, no reason given why the Doctor couldn’t go and pick Sarah up again. They don’t have an irrevocable split, and, unlike Jo, she’s not leaving him to live her best life with someone else, doing something important. It’s a very (very) sweet scene between Tom Baker and Elisabeth Sladen, but it doesn’t make a lot of sense in the context of the show. 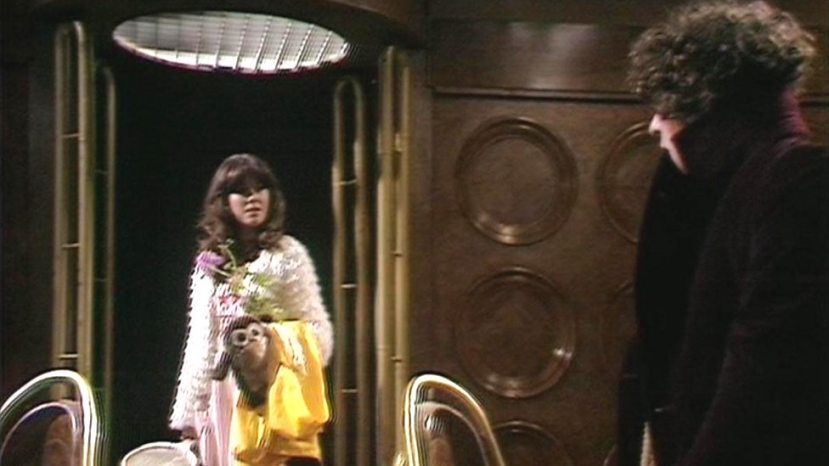 We leave her, freeze-framed, staring upwards and wondering. She’ll keep wondering for the next 30 years. In the meantime, it’s a not-ending that seems to have troubled both John Nathan-Turner, who considered bringing her back to oversee the Tom Baker/Peter Davison transition, tried to bring a bit of closure by suggesting the Doctor did go back, missed her, and so left her a K9, and then brought her back again for The Five Doctors. Russell T Davies brought her back too, to finally address this bit of unfinished business and give her a proper goodbye (except, then he found he couldn’t let her go).

I’m going to miss her. I don’t think she’s been nearly as well served by the scripts under Philip Hinchliffe as she was under Barry Letts (where she was practically Pertwee’s co-lead, carrying her own storylines and meeting the brief of an investigative journalist and feminist). By contrast, in Season 12 the scripts tend to favour Harry getting the action and relegating Sarah to a damsel in distress (frozen, imprisoned, poisoned), and in Season 13 she spends a lot of time trailing after the Doctor rather than carrying a B-plot. But her rapport with Tom Baker makes up for this: they work brilliantly together with an easy, uncomplicated partnership of friends that I don’t think is repeated for any Doctor and companion (perhaps excepting Mel) until Donna turns up.

Next episode: The Deadly Assassin