This is a masterclass in how to structure a Doctor Who four-parter. Having established the situation in the first episode, introduced a wider cast of characters and complications in the second, this now begins to weave together the side plots into the main story, with Palmerdale’s greed and Skinsale’s attempts to foil him escalating the crisis on Fang Rock, further isolating the characters. Meanwhile, the Doctor’s attempts to fight back against their mysterious assailant hit a stumbling block when he realises, too late, that it is a shape-changer, and, in one of the greatest of all cliffhangers, tells Leela, ‘I’ve made a terrible mistake. I thought I’d locked the enemy out. Instead, I’ve locked it in, with us.’

After a season of vast, civilisation-ending threats and planetary dictators, I love how stripped back this is. It’s The White Album after Talons’ Sgt Pepper. The canvas is tiny; the threat, in Doctor Who terms, is petty, as are the characters’ motivations. Palmerdale wants to make money, Skinsale wants to protect his reputation. The Doctor just wants to get out of this alive. Tom Baker, who by most accounts was a bit of a nightmare during the making of this, has never looked or sounded as impressive. One moment he’s still, and haunted, looking like one of those moody line drawings in an annual. The next, he’s full of furious energy, raging at the uselessness of his allies, and apparently genuinely quite frightened: ‘I’ve never been more serious.’ Louise Jameson gets some great moments, like bashing her way through Reuben’s door like Jack Nicholson in The Shining, or giving a hysterical Adelaide a wincingly convincing smack across the chops. 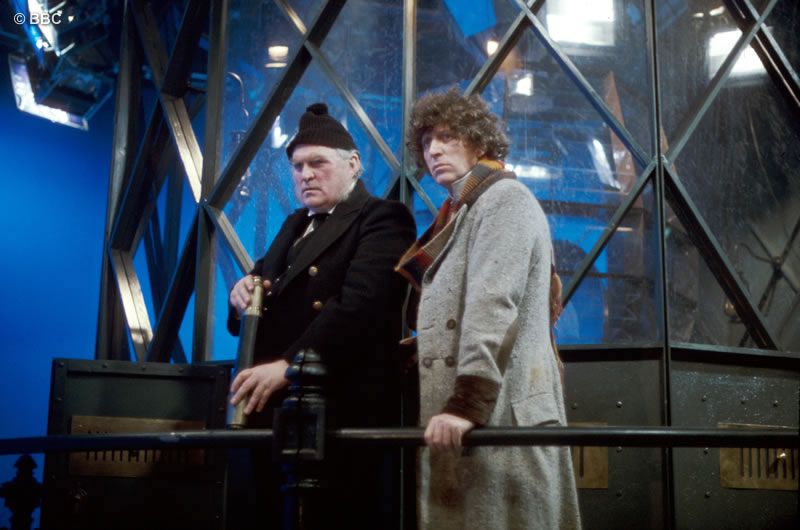 And with limited resources, Paddy Russell makes the Rutan a credibly frightening monster, suggesting its presence during Palmerdale’s death scene with some sickly green lighting and shrouding the screen with fog. When it takes Reuben’s form, Colin Douglas makes himself look wonderfully sepulchral, except for a chillingly brilliant moment just before he kills Harker, when he gives a deliberate, smug smile. Brr. The limitations of the Pebble Mill facilities are only slightly obvious from some of the relative crudeness of the electronic effects – which means this looks a bit more like an ITV regional production than a BBC one. It doesn’t matter though: Doctor Who stripped back to its bare essentials is excellent.