OK: it’s Quatermass and the Pit.

Well, it’s not quite, but it’s as close as Doctor Who gets. ‘You think we’re all aliens,’ a shaken Adam asks Fendelman when the implications of a human skull older than humankind sink in. ‘Man did not evolve on Earth,’ replies Fendelman – who’s also used some scientific gizmo to peer back to the moment of “Eustace”’s death (very like Quatermass being able to peer into the Martian race memory). I quite like this thrill of existential horror. And, like Nigel Kneale and “Guy Leopold”, Boucher draws a link between the alien origins of man and human superstition, largely via the character of Ma Tyler, who says things like, ‘It were hungry for my soul!’ 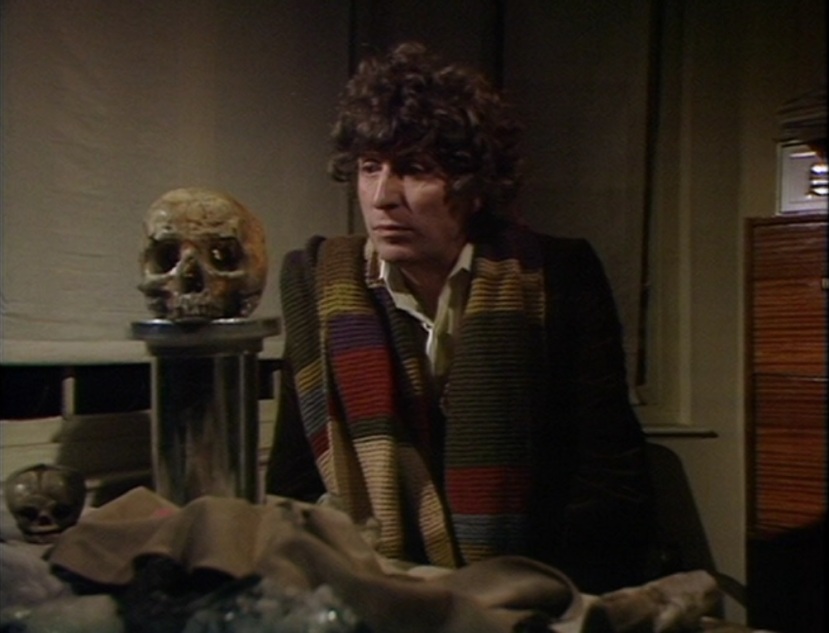 On the other hand, Quatermass doesn’t have Dr Who in it. I’m really enjoying Tom in this: the way he bursts into Fetch Priory and starts issuing orders until Fendelman waves a gun under his nose and locks him in a cupboard. Then, as Leela waxes lyrical about his great knowledge and gentleness we cut back to him furious about being trapped in a cupboard. The cliffhanger is a classic: the Doctor larking about with the skull, suddenly controlled by it. He certainly seems to be enjoying himself a lot more here than on Fang Rock, even if the horror of a menace from Time Lord mythology isn’t lost on him. This is shaping up nicely. It’s a bit talky and there are a lot of kitchens (at least The Invisible Enemy always had something new to look at), but, like the Krynoid and Morbius, the Fendahleen creatures are memorably weird.

Next episode: Image of the Fendahl – Part Three