I unreservedly love the opening episode of a story that evidently should have been called Death and Taxes. Amazingly, it’s the first ‘normal’ Robert Holmes script in years (rather than an emergency rewrite of someone else’s story, or the special exemption for the experimental The Deadly Assassin). Predictably, it’s both very horrible and very funny.

The horrible bits are very horrible indeed: the Gatherer’s (played by the aptly-named Richard Leech) grim commoditisation of human life, with tax rebates for recycling corpses, drives Citizen Cordo (a convincingly downtrodden Roy Macready) to attempt suicide. This brings the Doctor and Leela into the story, and pretty soon they’ve met up with a group of rebels that look like they’re auditioning for Blake’s 7 (obviously Michael Keating, but William Simons look like he’s cosplaying Blake in Blake). This is results in some of Holmes’ trademark florid dialogue (‘Show courtesy to my rank or I’ll cut your skin off inch by inch’; ‘Touch me again and I’ll fillet you’).

But lest this breaks the show’s new mandate of being family friendly, Holmes offsets it with plenty of jokes (the Doctor’s response to Cordo’s tax problems is pure Tom: ‘My dear old thing, all you need is a wily accountant’), and has found a way to make K9 work beyond the confines of The Invisible Enemy. This includes giving him a slightly modified personality (he’s still a know-all, but is much chirpier about it, and John Leeson raises his voice a pitch), an entertainingly spiky relationship with the Doctor as they play chess, and amusingly doggy characteristics (‘Entreat master. I’ll be good’ he pleads when he wants to go for a walk). I wonder whether the Doctor repeatedly ignoring Leela’s reasonable suggestions is Holmes’ sardonic take on the Baker/Jameson working relationship. 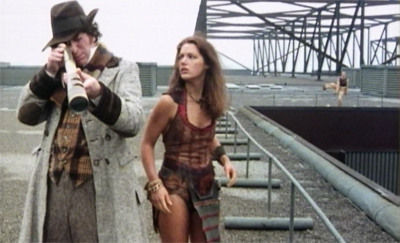 There are loads of other funny touches, some (like ‘Run Doctor, it’s the Gatherer’ as everyone instinctively flees from the taxman) in Holmes’ script, some presumably worked out by the director and cast during rehearsals. I love Leech’s pronunciation of ‘maho-gainy’ as he smugly shows off his desk, to an overawed Cordo. But they’re all packaged in a fundamentally good first episode, that includes some SF concepts (the artificial suns; the huge Megropolis) and, unlike Image of the Fendahl, makes the TARDIS’ arrival fundamental to the plot – when he finds it in the restricted roof area the Gatherer takes it, and K9’s emergence, as evidence of a conspiracy. And while the design work still features many of the problems of Season 15 (the red X taped out on the wall outside the hospital is particularly egregious), the location filming on vast, industrial architecture looks good.