Geekily, the most exciting thing about this episode was the surprise appearance (I think the first in the show) of BBC Micro style graphics to display the prison ship hovering above the stone circle. As a staple of the show (and schools) through the 1980s, it’s like seeing the future arrive. It’s also a great illustration of the central twist of The Stones of Blood: a story that, up until now, has been full of ancient stones and antique oil paintings veers into the cleanest white space corridors this side of Nerva (fittingly, there’s a Wirrn in one of the cells). 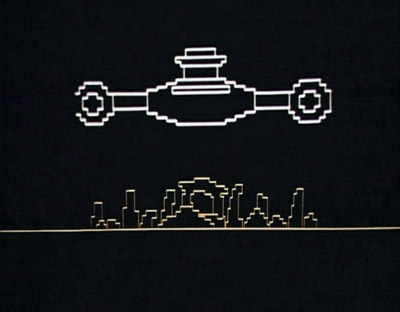 To an extent, many of the fourth Doctor’s gothic horrors have featured some sort of space travel (Image of the Fendahl and Pyramids of Mars took trips through the Solar System; The Masque of Mandragora featured the Helix), The Stones of Blood is just a bit less coy about making space look different from Earth. The juxtaposition is jarring, but it’s meant to be: while Emilia and K9 battle the Ogri in the darkness, the Doctor and Romana are fleeing the Megara on a brightly-lit spaceship with a slight hint of the Tantive IV. It signals that this isn’t going to play out like we might have expected.

Having revealed her as the baddie, Fisher keeps Vivien off screen for most of this (although she does get to deliver the brilliant line, ‘I’ve been so many things for so many years’). Instead, the Ogri are the most tangible threat. Again, they’re both a bit silly and oddly effective: the one that crashes through the cellar in pursuit of Emilia and the Doctor could be straight out of a Monty Python sketch, but the story manages to carry it off. Later, the feted scene of two post-coital campers (the man emerges doing up his trousers) being drained of the rest of their vital fluids is one of the most horrible incidental details in the entire series, serving only to illustrate a point. ‘How do you kill a stone?’ muses the Doctor (just as he once pondered ‘How do you kill death?’).

Next episode: The Stones of Blood – Part Four