Both Philip Hinchcliffe and Graham Williams preferred to invent new baddies rather than rely on old ones, and Davros is the first monster/villain to debut during Tom Baker’s run to get a return appearance. Fittingly, it’s in one of those “Hitler resurrected” type stories beloved of pretty much all 1970s telefantasy, where it turns out he’s been frozen in the bunker for years only to rise again to wreak vengeance.

Substituting for Michael Wisher, David Gooderson isn’t one of the classic Davroses. He’s ok, but his voice lacks some of the dripping malevolence/ranting megalomania of the other versions, and the way he shuffles from side to side as he wheels himself around makes him look a bit comical compared to the icy stillness of Wisher. On the other hand, I like how cool he is when the Doctor threatens him, and he has a self-absorption that’s convincingly in keeping with the original portrayal. Nation (or Adams) gives him some good lines – ‘I cannot allow myself the luxury of death’. I also enjoy how little interest the Doctor has in debating ethics with Davros this time round compared to their first meeting. 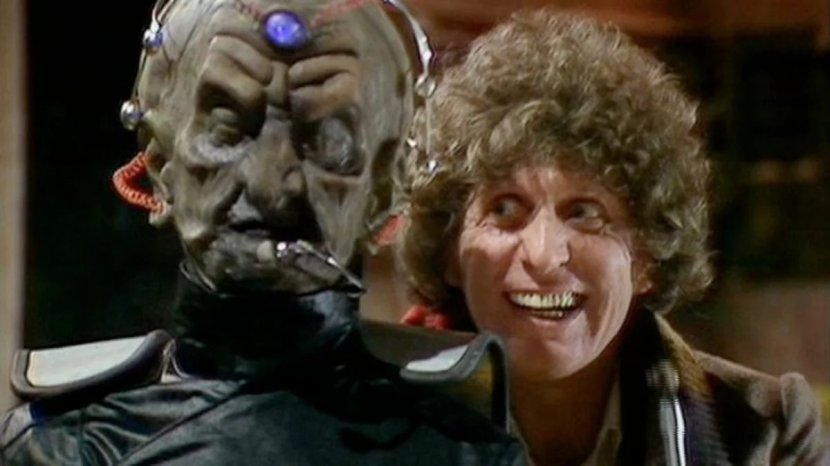 The novelisation of Destiny of the Daleks was a childhood favourite, and the adaptation of this episode in particular sticks in my mind: taut and frightening, as the Doctor is cornered with Davros. Onscreen it’s a little bit less impressive (the way one of the Daleks’ workers nods smugly at his fellow captives when the Doctor bargains for their release is hilarious), however the Daleks’ extermination of their hostages is as brutal as they ever get.

Given both Romana and the Doctor reference their origins (‘They used to be humanoid themselves’; ‘The Daleks were originally organic lifeforms’), and the Doctor encounters a gloopy Kaled mutant crawling round the surface, the script doesn’t clarify at what point they transitioned to being robots dependent on battle computers rather than their own intellects. I guess it sort of works in this story but tends to diminish the Daleks and elevate Davros in a way that Genesis of the Daleks, with its proto-Daleks breaking their programming and asserting their own independence, didn’t.

The cliffhanger is really good, with some brilliant, dynamic camerawork as the Doctor flees from the Daleks, which loom above him, then spots Romana trapped in the Movellan doomsday weapon.

Next episode: Destiny of the Daleks – Episode Four