Like Terror of the Autons, this is a fizzy pop version of a much more traditional Doctor Who story, where the point is to make something that feels totally 1980. As such, a lot of it feels more dated than Season 17, which was less concerned with being modish. The dayglo pink video effects and the solarization on the surface of Argolis looks like something from the Ashes to Ashes video; some of the extreme close ups make it difficult to get a sense of scale or setting. But Bickford also includes some really strong moments – especially the giallo style murder of Stimson, who’s stalked through the Hive making weird discoveries (including Klout’s Slitheen-style skinsuit hanging in a wardrobe) before finding his way to the darkened tachyon room and his death at the hands of something horrible. 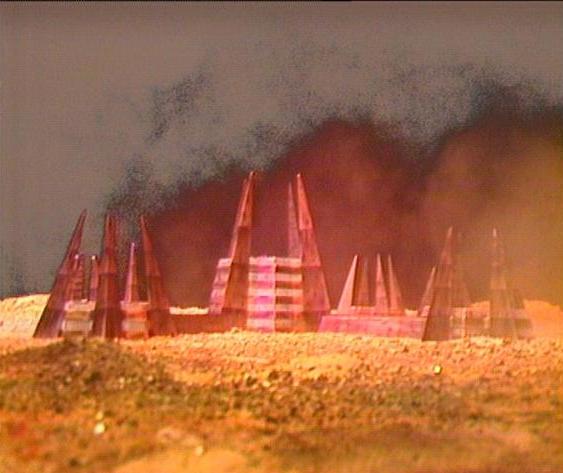 Some of the concepts, too, have a real grandeur to them. A war that lasted 20 minutes and devastated a planet. The slow extinction of a race condemned to sterility, desperately trying to eke out a few more years of life. The illustration of time reversing by having sand run up an hourglass. This is a scene that might have been lifted from City of Death (or perhaps Fisher’s A Gamble With Time script), given both stories feature a scientist trying to roll back time in a field, relying on Romana for the critical breakthrough.

There are some really good moments including the Doctor’s facetious reaction to being put on trial again (‘You couldn’t hang a hat on that!’) and another excellent cliffhanger (two for two this season), of an aged Doctor shuffling from the tachyon generator. I also enjoyed the too-brief glimpse we got of the Doctor in the jacket he wears under the long coat in this story only: it’s a nice throwback to the Season 12 look.