It’s possibly a mark of Terrance Dicks’ feelings on the matter that the Doctor doesn’t even know he’s got a new companion until more than halfway through the serial, and Adric spends pretty much the whole episode in a deep sleep. Instead, the focus is on the Doctor and Romana’s ongoing investigations, which, in true Dicks style, now include a chunk of Time Lord myth.

After Full Circle felt like bits of the Pertwee years, this explicitly references them in the delightful scene of the Doctor and Romana imprisoned. Just as the third Doctor used to do with Jo in these situations, the two of them sit on the floor while the Doctor regales Romana with stories of his old hermit mentor. Fittingly, it’s the most charming moment of the season so far, as the Doctor tells Romana she’s wonderful and she practically glows. The Doctor’s bit of aikido on a guard is only undercut by Tarak the Traitor (played by Thane Bettany, dad of WandaVision’s Paul Bettany) opening the door into his face, which gives Baker the chance for some funny business. The Pertwee overtones also include Stuart Fell as a guard. 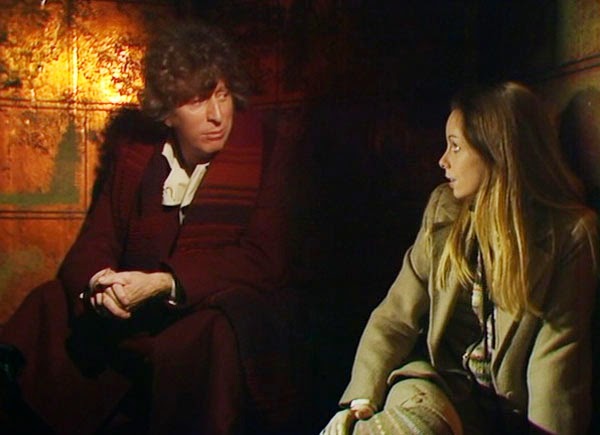 This is great fun: I love the guard with a card reader (rather than a massive key), and Romana’s impatience with the old prisoner trick. And Baker gets some good creepy mileage from the Records of Rassilon and the legends of the Great Vampires swarming through space in Gallifrey’s dark ages. Emrys James is gloriously over the top as Aukon: he makes William Lindsay and Rachel Davies’ mannered performances look almost subtle. You definitely wouldn’t get away with the amount of knives these days, though.