‘You were right, we abused our power. But judge whether we’ve not suffered enough.’ Romana’s dedication to freeing the enslaved Tharils provides the momentum that carries this through to the end – and beyond, as she leaves to become the Daenerys Targaryen of E-Space and free enslaved Tharils across the pocket universe. It’s a departure done without much ceremony or emotion, but works, I think, because Romana leaves with a mission in a way only Steven and Jo have before. You couldn’t really marry her off, and the excuse of not taking her to Gallifrey doesn’t apply so it had to be something like this. 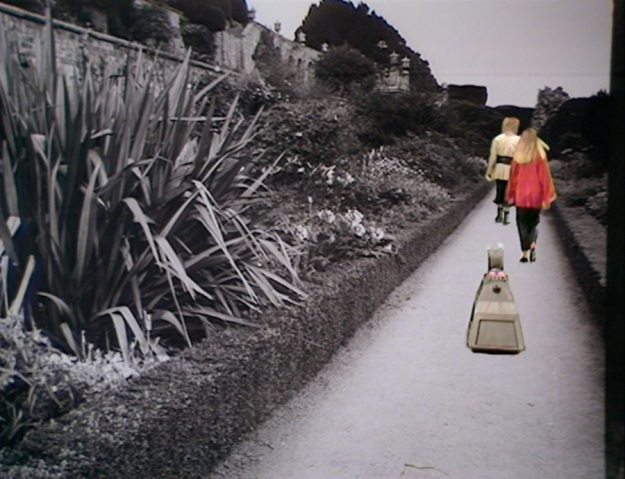 Romana and Rorvik both want to ‘do something’, while Biroc counsels ‘Do nothing. It is done.’ There’s the implication that the enslavement of the Tharils was their penance for enslaving others, but they’re now ready to be free. Biroc took the Doctor through the mirrors and showed him the fall of the Tharil Empire almost because he wanted a Time Lord’s forgiveness and asks to be judged. The Doctor’s equivocal response – playing back Biroc’s words uttered just before the humans overthrew their slave masters, ‘the weak enslave themselves’– is therefore an implicit permission that this is the time for the Tharils to liberate themselves. Everything else becomes an irrelevant sideshow.

That could give the impression that the story is a bit pointless: that everything would have happened exactly the same had the TARDIS never turned up, but that’s clearly not the case. The crew is changed, and the TARDIS seemed essential in some way to Biroc’s plan. Rorvik might be onto a loser, but he nearly does for the Doctor, almost strangling him with his scarf in a particularly brutal fight (he also calls Adric a ‘poisonous runt’ – at least, I think it’s runt).

Full Circle was a good attempt to apply Bidmead’s SF leanings to a traditional Doctor Who monster story. This is something quite different. Alongside The Celestial Toymaker, The Mind Robber and The Deadly Assassin, it’s unlike anything else the show’s tried before. It seems like it was gruelling to make, but the results onscreen do capture some of the dreamlike visuals the writer and director were aiming for. This is easily the best serial since City of Death – and in its own way, more memorable and haunting than anything since The Deadly Assassin.

Next episode: The Keeper of Traken