‘I’ve always found domination such an unattractive prospect.’ Something about this reminds me of Bob Baker and Dave Martin. Possibly it’s the juxtaposition of Seventies paranormal airy-fairyness with a pretty stolid cast of contemporary characters. Perhaps it’s because elements look like a deliberate homage to The Three Doctors (a mysterious wizard figure and his lumpen guards living in a massive castle in the middle of a barren landscape, apparently using psychokinesis to create objects from thin air). In which case Captain Stapley fulfils the Brigadier role and Professor Hayter stands in for Dr Tyler. 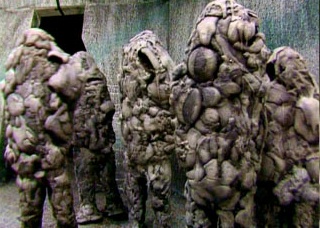 After a season of stories that have frequently pushed the boundaries of Doctor Who it’s nice to get something a bit retro. Peter Grimwade’s script might unaccountably give the impression he hasn’t watched the show since about 1976. Some of the dialogue would have had Tom Baker hurling the script across the rehearsal room (‘Hyperstimulation of eidetic images. The most powerful hallucinatory induction I’ve ever come across. They must be using ultrasonics’). The monster design verges on incompetent (I know this era of the show gets criticised for being “soapy” but the Plasmatons are taking it literally, and the hydra thing is even worse). They’ve got Nigel Stock (like Richard Todd, a film star of yesteryear), but given him nothing to work with. They’ve got Anthony Ainley doing a bizarre impression of an “Arabian” sorcerer for no reason except a cliffhanger reveal.

Whatever. There’s a lot that’s bad. But there’s the best use of old monster clips since The Mind of Evil. Matthew Waterhouse gets a cameo that, rather horribly, forces Nyssa and Tegan to confront Adric’s death (in a scene that prefigures the “phantoms” in the Tomb of Rassilon). There are some good lines: ‘I hold the whole genius of night bound to my will.’ Michael Cashman’s reaction to meeting Kalid and Anthony Ainley’s smiling nod reach new heights of camp. In general, Ainley goes gloriously over the top, even kissing the TARDIS. ‘Evaneragh tumal tumal’ indeed.