‘It concerns me that they did not wake up as we planned in the first place.’ My eyes! It’s tedious to point it out, but Sea Base Four is so over-lit it’s almost painful. And, when the TARDIS is also a brightly-lit white space it doesn’t provide much in the way of interesting contrast. The show’s got this right recently (even in stuff like Four to Doomsday), so I don’t buy the argument that there was nothing to be done – particularly since, when the bridge goes into Missile Run mode, the lighting’s turned down and the atmosphere immediately improves by a corresponding amount.

Johnny Byrne can write better than this, and I wonder, given he apparently wasn’t able to re-work the over-running scripts, how much of it is his dialogue. Some of the lines are truly abysmal: ‘Lieutenant Michaels was careful to the point of paranoia. Men like that aren’t electrocuted carrying out simple maintenance’; ‘You’re a hard man, Nilson, but you forget, I’m a doctor. Murder does not come easily to a person of my training’; anything the Silurians say. Things people might actually say have been replaced by info-dumping and melodrama. This perhaps indicates a twist from the conceptual airiness of Season 20 to a more “muscular” style.

Certainly, the Doctor is suddenly a lot more brutal than of late, beating up some guards with a sub-Bond quip, ‘I’m so sorry’. He’s done this before – but usually it was with a “Hai!” and a bit of fantasy judo rather than the nasty-looking gut punch he throws here. It’s terribly Seeds of Doom. He’s also quite antagonistic towards Turlough which feels a bit of a step back after the promising happy family of The Five Doctors (at least he smiles when Turlough wanders off to find Tegan, suggest he was just playing). Maybe it’s his severe new haircut that’s done it.

I sound like I’m down on this, but it’s not a total damp squib. The set-up is intriguing – a timely future Cold War setting that a 1980s’ audience would instantly get, and where plotting both inside the base (Solow and Nilson) and outside (the Silurians and Sea Devils), combined with the unfortunate arrival of the TARDIS, combine to escalate the situation and threaten to turn the Cold War hot. The model work is great. The new Silurians and Sea Devils look good, and their undersea base, in contrast to Sea Base Four, is atmospheric (even if they seem to have built it around a Cyberman gun – ‘Excellent’ as the Silur-Leader would say). It’s only a shame that they’re introduced, like so many 1980s’ monsters, with so little drama – just three of them standing about like Terileptils talking very slowly at each other. 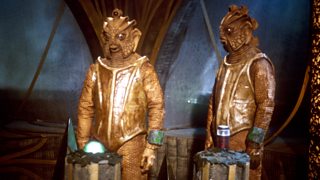 Next episode: Warriors of the Deep – Part Two