‘Oh, marvellous. You’re going to kill me. What a finely tuned response to the situation.’ Maybe it’s the desperation of the situation, or maybe it’s just that Bidmead’s concept of the Doctor is different from Saward’s, but the Doctor’s unusually no-nonsense this week. He stares death in the face, then saves the life of the man who threatened him, before heading into the caves under the crashed colony ship to follow Turlough. All the time he’s setting the pace, Range trailing in his wake, and winning people round to his way of thinking – although not easily: Plantagenet lets him go off to investigate, but keeps Tegan as a hostage, and Brazen sends a guard to watch over him.

Bidmead also continues to give Tegan and Turlough actual things to do. Tegan discovers the ‘deaths unaccountable’ file and begins to unpick the lies Brazen and Plantagenet have told to “protect” the status quo. Strickson gets his best material since Enlightenment, as Turlough’s quick thinking saves the Doctor from Plantagenet’s firing squad (a deadly hatstand is even funnier than a deadly jelly baby). Then, he forms a charming relationship with Norna and deduces that there must be a reason for the block and tackle in the research room and discovers the hidden trapdoor to the tunnels. And then his buried memories, repressed as effectively as the deaths unaccountable, begin to come back to him. 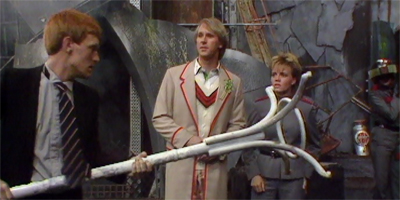 Those memories involve something called ‘Tractators’. They aren’t exactly the best monster costumes, but they’re memorably weird – I have vivid childhood recollections of the cliffhanger, as they circle the Doctor and Norna. Their arrival is also a lot better set up than most of the monsters in this period. Menace is created through the “attacks” from above, by the hungry earth (good title, that) which devoured Captain Revere in the previous episode and his son in this, and by Turlough’s emerging memories. This wouldn’t win any awards for direction, but Ron Jones injects a bit of drama into the Tractators’ first appearance, hiding in plain sight and swinging round to follow Turlough and Norna. This is much better than the Terileptil wandering into shot, or the Silurians just standing there burbling.