‘You’re finished Kamelion!’ Did anyone remember the android was on board? The loss of that scene in The Awakening means that Kamelion is reintroduced only when it’s going haywire. I don’t think it’s a huge issue – a lot more recent series reintroduce characters to write them out – and I like that it’s shape-shifting/psychic manipulation properties are relevant to the storyline. It’s a bit more of a stretch to accept this in the same episode that Turlough’s own past seems to be coming back to haunt him, but anything that gives Mark Strickson decent material is good for me. And we finally get to have him strip down to his underwear, having been thwarted by the removal of the Warriors of the Deep sauna sequence. 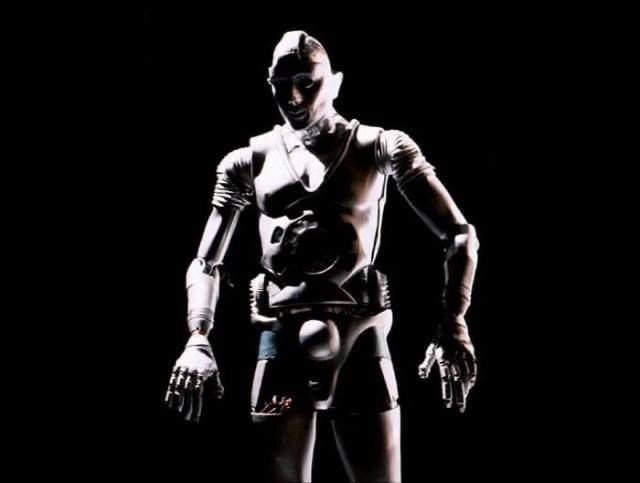 Both of Peter Grimwade’s previous scripts have included two separate locations which shouldn’t be linked – but are (Heathrow airport and prehistoric Earth; a spaceship and a boys’ school). This makes it a hat-trick. It’s a shame, though, that the location filming in Lanzarote isn’t used more effectively: as it stands, we have Timanov and Malkon apparently overlooking the same blue sea that Howard and Peri are sailing on, so it’s almost a surprise that they’re meant to be standing on different planets. Better, surely, to have had Sarn represented by the rocky mountains – which just look like an expensive and expansive Doctor Who quarry – and keep the beaches for the scenes actually set in Lanzarote.

Still, it is gorgeous to look at. Davison looks great in shirt sleeves (although less delighted to be given lines like, ‘Hurry, I don’t know how long there’ll be before the next emission’), and Peter Wyngarde’s presence adds a touch of class. Timanov is another of the religious zealot characters that have been cropping up in the show since the year dot, but Wyngarde’s iron fist in velvet glove performance lifts him up above the rest. Nicola Bryant isn’t very well served by material that makes her sound like a whining, spoiled brat, but her nightmares hint at a darker backstory, and leaving her trapped in the TARDIS with the Master gives an evidently delighted Ainley chance to deliver the ‘You will obey me’ catchphrase.