‘These people are the lowest type of human being. One only has to look at them to realise the extent of their depravity.’ Trying to put myself in the shoes of “Joe Public” rather than someone who’s known for years this is one of the all-time classics, it’s very much of a piece with Season 21. There are dour military types in grey coveralls with coloured flashes, poison gas, gloomy caves, lots of tough dialogue, and a monster that’s only better than the Myrka by virtue of being less exposed. This is absolutely not exceptional.

Except, it clearly is. Because while all the above is true, it’s also true that this is done more sharply, more stylishly, more wittily than anything else in Season 21. It’s Robert Holmes quickly getting the measure of the JNT/Saward house style and writing something that fits the brief, while also doing it better. Characters talk in Holmes’ trademark florid dialogue, but they also say things that sound real, and hint at a world beyond what’s on screen. The grunts talk bitterly about ‘picking chacaws’ rather than oddly craving ‘cool spring mountain water’. Characters snipe at each other, but meaningfully rather than just to show they’re tough.

The Doctor and Peri are charming and pleasant and stand completely at odds with the back-stabbing, bilious people of Androzani. They seem to enjoy each other’s company – the show was getting better at this during Season 21 after two years of squabbling rancour in the TARDIS – but Peri, in Holmes’ hands, combines some of Tegan’s brashness with the easy-going nature of Nyssa, and this might, given time, have turned out to be a great partnership. But it’s not to be: Peri is dying from four minutes 40 seconds into the episode, and the Doctor 10 seconds after that. Notice the way the Doctor’s already rubbing his hands when he’s brought before Chellak, as the spectrox toxaemia begins to take hold. 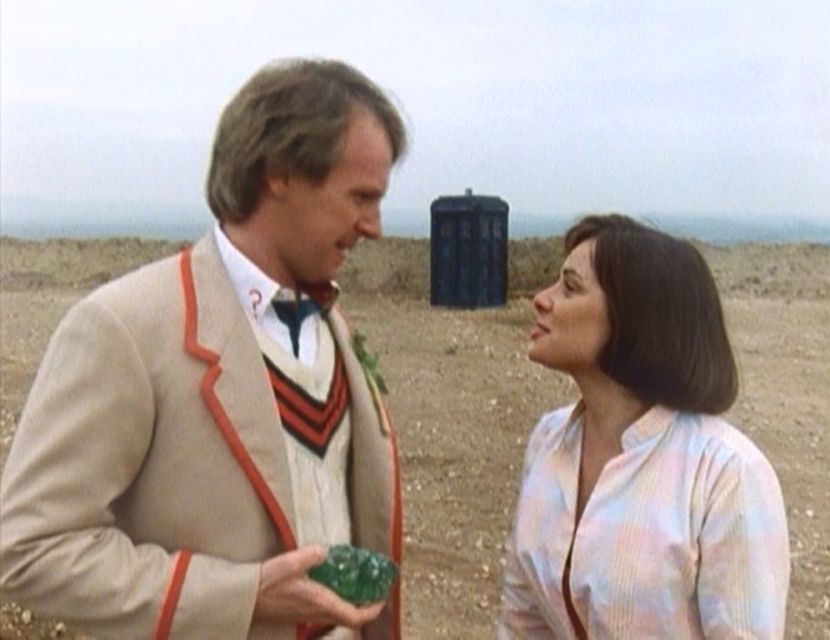 This would still have been stand-out directed by Matthew Robinson or even Ron Jones. But under the direction of Graeme Harper, it’s lifted further. The camera roves around, restlessly, adding a sense of incipient menace even to the talky scenes. Everything feels dynamic: Morgus and Timmin are forced almost into each other’s arms in a rising lift. The casting is spot on: we don’t see much of Stotz or Jek yet (barring Christopher Gable’s very hairy hand), but John Normington is spectacular as Morgus – every line delivered as if it’s a carefully chosen soundbite, except when he turns to camera to express his darker purpose. What a great (accidental) choice and brave of Harper to keep it in. And what a great look: oily pony tail on a balding head, and probably dyed too: vain and creepy and rich enough that it doesn’t matter.

Next episode: The Caves of Androzani – Part Two