‘If it’s a question of his life or mine…’ Better than the previous episode because the bad bits are just bad rather than horrible. The Doctor is still behaving like an idiot – for example, hiding behind Peri when he’s threatened by a Jacondan – but this is largely played for (and works as) comedy. There’s nothing grisly like the assault in Part One. He’s starting to settle as a character who does everything at the extreme – extreme enthusiasm and excitement at the prospect of exploring somewhere new; delight at re-meeting Azmael and reminiscing about their drunken exploits. Baker does well with all of this, but he’s basically been asked to play a very annoying person. The contrast with the insouciant fifth Doctor is deliberate and extends to every part of the new Doctor’s look and personality. The common thread between them is a certain brusqueness towards their companions.

The plot is straightforward, which is fine: this is more about giving Colin Baker lots of things to do rather than telling a complicated story – perhaps a lesson learned from Castrovalva, which went to the other extreme of keeping Davison largely out of the action and focusing on the science of recursive occlusions and hydrogen inrushes and ended up giving the audience too little chance to get to know the new lead. Baker gets to do his Sherlock Holmes deduction scene, working out that Hugo is on the trail of kidnapped children. This also looks better than the previous episode, particularly the scene of the Doctor and Peri sneaking through the dark corridors of the safe house: lit through grilles, they positively glow with colour against the blackness.

The bad bits are the script and the costumes. The dialogue is almost entirely awful: the Doctor’s bizarre ramble about ‘the life force itself is in danger of extinction’, rubbishy science (‘this is passive power for transportation’ – what?) and dull wordplay. The Doctor’s costume suddenly looks subtle when Hugo wanders in dressed in a tinsel kimono. Colin is working hard. Maurice Denham is veteran enough to retain his dignity, and some of the less convincing performers from last time get a day off here. This is pretty rubbish, but at least it’s not offensive rubbish. 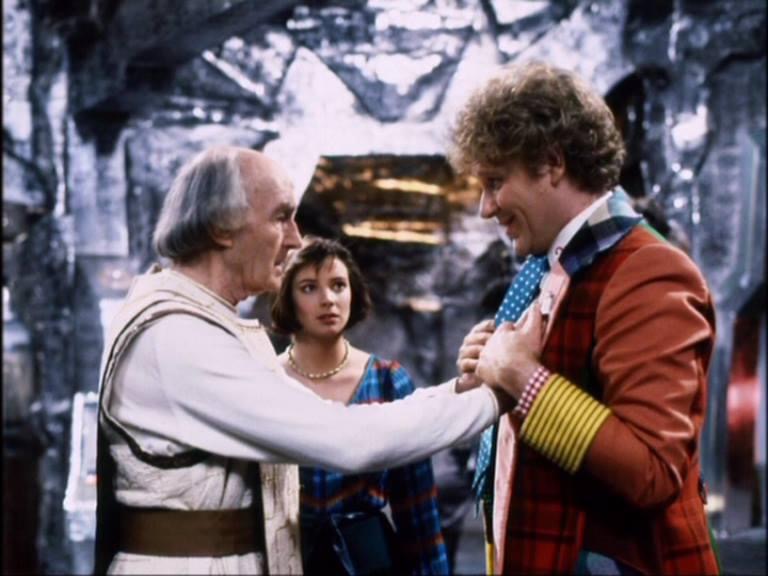