‘The beginning of a new era.’ The third and fourth Bakers arrive with the first of 11 episodes they’ll write over the next two series. Presented with the kind of shopping list that Grimwade would have baulked at (introduce a female Time Lord villain, include the Master and set it in Earth’s history) they come up trumps with what’s easily the most solidly-conceived and scripted sixth Doctor episode to date. True, it lacks Vengeance on Varos’ red-top front page approach (although there are more exploited miners), but what we get instead has some of the gentleness of a Davison story wedded to the glossier style of Season 22.

The big difference is the Bakers get the Doctor right, without entirely blunting his edge. He briefly yells at Peri when the TARDIS malfunctions and when her smugness infuriates him, but within minutes of arriving in the 19th Century he’s listening indulgently to Peri’s botany lectures, rushing to help injured men, trying to bluff his way to a meeting with George Stephenson, and taking the initiative to investigate strange goings on in the men’s steam baths (calm yourselves). It’s an interesting choice to have him spend a large part of the episode on his back, strapped to a trolley, but these are some of Colin Baker’s most enjoyable scenes as the Doctor has to relying entirely on his wit and gift of the gab. I like that the Doctor meets the wives of some of the maddened miners, and the sense of a community genuinely shaken by the Rani’s actions. I enjoy the moments where the Doctor is put in his place a bit by the even more pompous Lord Ravensworth. I also like Peri’s gentle teasing of his ego – like when she says she thought she’d already met a genius. There’s something very Pertwee and Manning about this, and it’s the first time I really buy the sixth Doctor and Peri as a viable team. 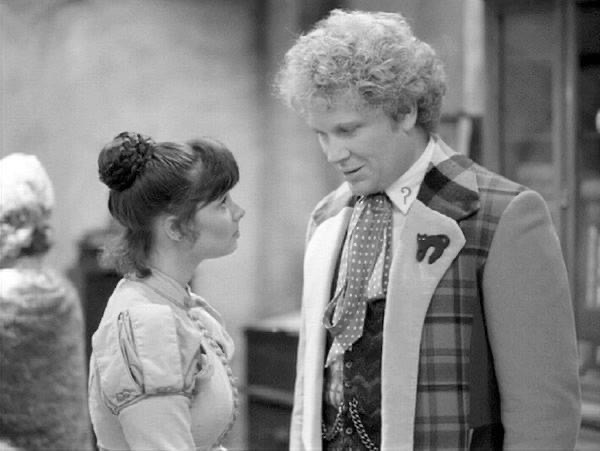 I also like the interplay between the Master and the Rani. There’s a line of criticism that the Rani’s entrance renders the Master impotent. Not in this episode it doesn’t. If anything, the Master immediately places the Rani on the backfoot by disrupting her plans and turning her bag of tricks against her. Much against her better judgement she’s forced to become his sidekick, co-opted into his mission to destroy the Doctor when she’d much rather be extracting fluids from her miners to regain control of Miasimia Goria. Like Nabil Shaban’s Sil, Kate O’Mara makes the Rani into a brilliantly fun villain, arrogant and cruel and incredibly camp (how long has she been disguised as a crone?), poking fun at the Master’s obsession and commenting on his previous adventures like she’s been following them in the Space-Time Telegraph.

To be fair, the Master’s plan is a melange of his last few ideas: he wants to take over a planet and rule it, he wants to pervert history by meddling in Britain’s Industrial Revolution (why?), and he wants to kill the Doctor without doing it himself. His motivations are less clear-cut than the Rani’s, but then, he’s never been the most single-minded and focused character even if this is a bit scattergun even by his standards. Ainley at least gets some good villainous material – bamboozling the Rani, manipulating the miners and shooting a dog (the rotter) – which is more than he was given in some of his previous stories.

I really enjoyed this. The opening moments effectively set a sense of time and place, just like Matthew Robinson’s scenes of contemporary London did a month before: one of the strengths of Season 22 is that the location work is particularly good, and this has got much more location filming than most. The scenes in open countryside look suitably wintry and bleak: it’s a shame more wasn’t made of the Master disguised as a scarecrow for a proper frisson of folk horror.

Next episode: The Mark of the Rani – Part Two

Thanks to Paul Scoones for correcting factual errors