‘Wake me when it’s finished.’ It’s Robert Holmes’ final finished Doctor Who story and if The Two Doctors was his Frenzy, this is his Family Plot: a low-key piece of work that is largely content to draw on the back catalogue. When it does strain beyond that, like the Doctor’s attempts to defend the value of all life to Drathro, it rings hollow – the Doctor seems barely able to convince himself. The peroration falls far short of the fourth Doctor’s rousing celebration of humankind in The Ark in Space. His disputes with the Valeyard aren’t much more compelling, although Colin Baker performs them with gusto.

So, a disappointment then? Yes, but not a crushing one. The trial has been introduced well, including hints of a wider conspiracy that continue beyond this episode. The Valeyard has been established as a credible adversary who knows what presses the Doctor’s buttons, even as he betrays his own Doctorish habit of rising to a challenge and being “terrible on the rebound”. Their back-and-forth, moderated by a stern Lynda Bellingham, gives the otherwise quite static court room sequences some zing.

Above all, the Ravolox storyline is straightforward with some engaging characters and a much more appropriate tone: it’s pitched at all the family, rather than skewing adult – the food production/gunge tank scene is very kids’ TV, but I prefer this to Chessene licking up blood. The improved Doctor/Peri relationship also addresses the egregious issues of the past season, even making a joke that seems to reference the strangulation scene in The Twin Dilemma (‘I always knew there was an evil streak in you’/’That’s what you are: thoroughly evil’). It’s a shame events on Ravolox boil down to the Doctor pressing some buttons to blow up Drathro, but he does it saving the day and all the lives in Marb Station. It posits him as a hero in almost precisely the same way as Time and the Rani. Holmes at his most Pip and Jane. 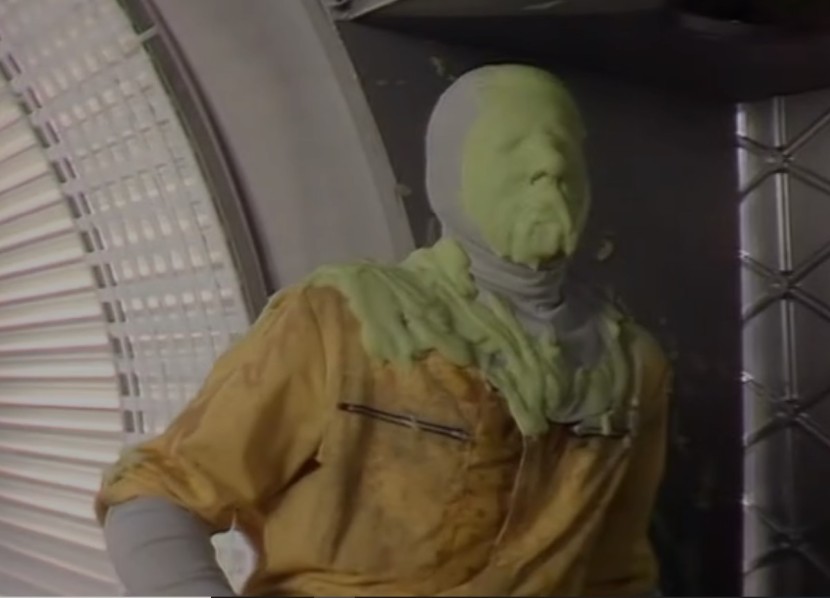 After the hiatus, maybe this wasn’t enough. The viewing figures started bad and got worse through the four weeks. But I suspect that’s largely the BBC’s fault for publicly criticising its own series, while refusing to properly invest in renewing it. I’m not sold, either, on the idea of the show putting itself on trial rather than just cracking on and telling some good stories. But given how few behind-the-scenes changes happened between Season 22 and 23 (same producer, script editor, cast, writers), it’s surprising quite how much of a change this is.

Next episode: The Trial of a Time Lord – Part Five