‘Are we having fun?’ It’s almost as breezy and charming as Part One, with a very new series approach to throwing out convenient exposition on the fly to keep things moving – like validium being attracted to other validium, and only being dangerous when it reaches a critical mass.

There’s more Time Lord backstory, with Omega and Rassilon casually mentioned, but whereas in Remembrance of the Daleks this just added more lustre to the Hand of Omega which already seemed like an arcane and powerful artefact, here it feels a bit throwaway. It’s hard to take the Nemesis entirely seriously when it’s being fought over by a woman startled by llamas, Cybermen that run away from a gold arrow flapping their arms and a neo-Nazi who double-takes when he finds his bow case is empty.

Some of this is brilliant: Richard standing on his own grave is a neat moment of existential horror. The Cyber ship is a good effect, the Doctor and Ace using jazz to disrupt Cyber communications, and the CyberLeader’s grim prediction of Peinforte that ‘the fact of her death will drive her insane.’ It undermines any pretence this is Windsor in November, but one of my favourite things is the Doctor and Ace sitting about in sunny fields saving the world with a tape deck.

Some of it’s nonsensical. I like the idea of gold-tip arrows harming the Cybermen more than De Flores’ machine guns, but since when could gold cut through them like cake. Why are the Cybermen bickering between themselves? And what on earth was the point of those skinheads? This is silly but likeable. 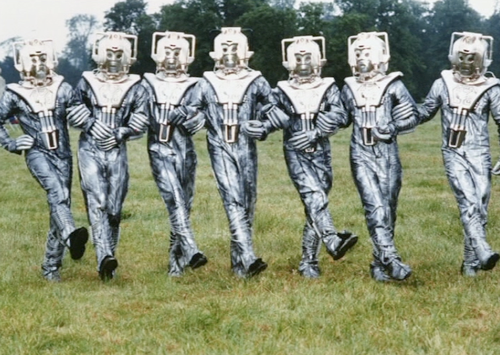