‘Deep down, everybody wants to come into the water.’ I guess because Fenric is an evil from the dawn of time it has the power to do more or less anything, which explains the creepy but baffling events in this episode: runes burning themselves into existence; a wellspring of deadly poison; girls running fully-dressed into the sea, and barnacled corpses rising from the deep.

Like Ghost Light, there’s a slight sense that a fairly straight plot – the British Government is planning for the post-war new world order with advance plans to take out the Kremlin – bumping up against ancient mystic weirdness. In the past, the ancient monsters might have been quasi-supernatural entities, but they usually had reassuringly prosaic servants: robot Yeti, robot Mummies, living mannequins. Even Azal’s powers were grounded in a Pertwee-era version of science. Fenric, on the other hand, seems like the genuine article: evil as a supernatural force, controlling the blood-line of the Vikings down through the ages (perhaps even to Whitehall – who knows how high the Wolves have climbed). 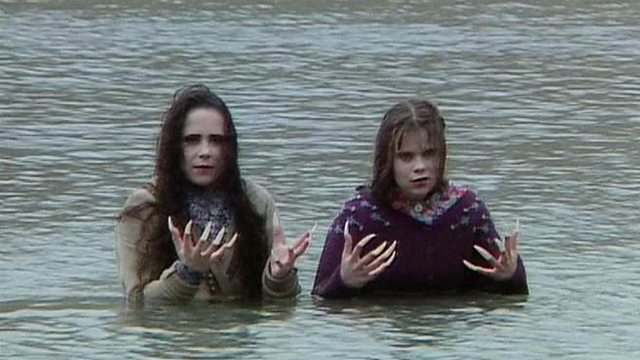 Mostly, this works just fine and creates some great moments, like the Haemovores emerging from the sea – an image the show’s been playing with since the World’s End cliffhanger. It was done better in The Sea Devils and Full Circle, but it still packs a punch. Millington symbolically killing doves with his biological weapon and declaring the trigger word is ‘love’ is on the nose. So is Wainwright’s crisis of faith, and Jean and Phyllis’ burgeoning sexuality in the face of Miss Hardaker’s dire warnings of sin is more supertext than subtext – dangerous undercurrents my foot.

Much of this is dangerously overwrought and teeters on the brink of being risible. Fortunately, so many things are happening at once that you don’t get much chance to dwell on the improbabilities, like why the British thought the Russians would just ignore a visibly glowing vat of poison in the middle of the Ultima machine. It also helps that the Doctor is palpably unnerved by Millington, goes around pointing out how potty he is (‘peculiar or not, orders is orders’), and, for once, seems quite the most normal person in this. It’s probably meant to be a hint of the “Cartmel Masterplan”, but his admission he doesn’t know if he has a family, and Kathleen’s response, ‘I’m sorry, it’s the war isn’t it’, is a nice little ret-con foreshadowing of the Time War.

Next episode: The Curse of Fenric – Part Three