‘Let me tell you something about those who get left behind. Because it’s hard. And that’s what you become: hard.’ The audience appreciation score of 76% is one of the lowest of the new series which just goes to show some people have no taste. Squinting, you might make an argument that the Abzorbaloff is a bit of a silly monster (although that would make you a bit mean, as it was designed by a child), or that the Doctor and Rose only appear for about five minutes.

But that seems to spectacularly miss the point. The Doctor might not be onscreen, but his absence defines the episode which is very much about the ones left behind, the people whose lives are irrevocably touched by the Doctor, literally and metaphorically, and what this does to them. For the members of LINDA, like all those fans who lived through the 1990s and The Absence of the Doctor, it means they research, they create, they imagine, and they form friendships and societies (until the fankiller Victor Kennedy waltzes in and sucks the joy out of it, turning it into work). For Jackie, it means protecting her daughter and the Doctor from the crazies (the implication being, it’s happened before).

The genius is it takes place from Elton’s perspective: a man who’s existed at the periphery of the Doctor’s adventures all his life. I imagine if he hadn’t been killed off in Rose, this might have been Clive’s chance to shine. He’s a portrait of a certain type of fan – straightforward, consumed by enthusiasm and excitement, tongue tied when he actually comes face to face with the character he’s been obsessed by since childhood – done with much affection and understanding. Given it explicitly evokes Rose, I particularly like how he’s coded as a male Rose, a blonde dressed in blue (as she is), tagging along with the dark-haired, specs-wearing, long-brown-coated Ursula. Marc Warren was in everything around the time this was made, as a sort of archetypal lovable underdog, but this remains perhaps his best role.

Opposing Elton (or rather Ursula), Victor Kennedy is a different kind of fan: still obsessive, but possessive as well, with no time for the fun and side projects that have diverted LINDA. The Doctor has to be pinned down, defined, located, and ultimately consumed. He poisons LINDA with his single-minded focus on his own appetite, whereas all the other members have been listening to each other as they grow closer together. Peter Kay is very funny (‘eczema’), both as the pompous Kennedy, and when he transforms into the Abzorbaloff and leaps across the desk in an obscene thong to pursue Elton at terrifying speed. 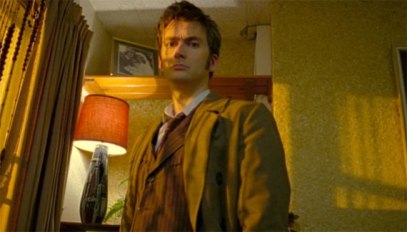 And then the Doctor and Rose turn up for the second time. When they appear at the top of the episode, it’s played as comedy, as they run back and forth pursued by a Hoix. But even this has an edge: through Elton’s eye’s they’re insane, so much on the same wavelength that they barely notice him – until the Doctor looks him right in the eye, for the second time in his life, and Elton runs. When they turn up again, to find Elton on his knees and the monster triumphant, Tennant is magnificent. He makes those scant minutes count, as he interrogates the Abzorbaloff, refuses to be cowed by it, inspires LINDA to unite one last time to defeat it, and then, as a punchline, remembers how he knows Elton. Standing over a mother’s corpse, staring down at her child, full of regret. And then that Series One ambivalence is back: the Doctor might be wonderful, but he’s also terrible:

Stephen King said once, he said, salvation and damnation are the same thing. And I never knew what he meant. But I do now. because the Doctor might be wonderful, but thinking back, I was having such a special time. Just for a bit. I had this nice little gang, and they were destroyed. It’s not his fault, but maybe that’s what happens if you touch the Doctor.

For me, this is the only Series Two episode so far that genuinely recaptures the spirit of Series One, of the uncanny interacting with the real world, and the Doctor as a terrible force of nature, to be feared as much as loved. Forget the questionable fate of Ursula as a sexy equivalent of one of Rassilon’s entombed immortals, focus on the dialogue (‘Listen to the sound of the universe’), and the ominous foreshadowing (‘I keep thinking of Rose and Jackie. And how much longer before they pay the price’). Appreciate this as the heart and soul of the series. This could be RTD’s mission statement.

But what I wanted to say is, you know, when you’re a kid, they tell you it’s all, grow up, get a job, get married, get a house, have a kid, and that’s it. But the truth is, the world is so much stranger than that. It’s so much darker, and so much madder. And so much better.

TARDISODE
Victor Kennedy researches the Doctor on a very Clive-looking website, tracks LINDA down and eats a waitress. Doesn’t tell you much about the episode, but the theme of searching for the Doctor and replaying Rose with a different perspective is clearly set up.

Next Time: Fear Her