‘You’re quite the funny man. And yet, I think, laughing on purpose at the darkness.’ This is, what, the new series’ third relaunch since Rose? It is, by some distance, the best. It has a confidence and swagger that it can do this, that there is life after Eccleston and Piper. There’s no sense that this is a tentative testing of the ground. Rose is name-checked but her ghost doesn’t hang over it, even when, as in the scene of the Doctor grabbing Martha’s hand and telling her, ‘Run!’, it explicitly evokes her. The result is audacious and brilliant.

Partly that’s down to Freema Agyeman. Martha has never had the popularity or traction of Rose or Donna, but I don’t think any of that is due to this episode where she shines. Agyeman is a naturally likeable presence and plays Martha as a winning mixture of good-natured KBO and absolute competence. Given she has to be good enough for the Doctor to contemplate her, despite what he claims, as a replacement for Rose, she needs to be even better at the job than either Rose or Donna. As such, she keeps her head when the rest of the staff and patients are losing theirs, logically works out both that the hospital is in an air bubble, that aliens have to be involved, that the Doctor sacrificing himself to Florence has to have had a motive, and that he’s got two hearts and needs a different type of CPR. She absolutely earns her place in the TARDIS in this episode, and if later on that relentless cheeriness, competence and unrequited love for the Doctor becomes a bit one-note, well, that’s the fault of later episodes and not Smith and Jones. 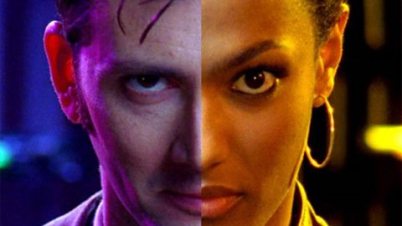 The other major success of this episode is Tennant, whose performance, coming off the back of The Runaway Bride, is his best yet. Bits, like him excitedly spotting a little shop; expelling radiation into his shoe; eulogising the sonic screwdriver then chucking it over his shoulder when Martha snaps him back to the present, and pretending to be a human to fool Florence, catch the joy of his Series Two characterisation. But there’s extra texture, a sort of disappointment that the universe doesn’t live up to its own potential, and the occasional flash of impatience (like his brusque dismissal of Swales) that live up to the promise of The Christmas Invasion. Some Doctors seem to rest on their laurels after a successful first year, but Tennant is stepping it up.

Around the central partnership, everything else works from the brilliance of making the Judoon stubbornly solid rhinos (I love their little ears), to Florence’s chilling little straw, to Roy Marsden’s perfect caricature of a pompous consultant, to Martha’s melancholy theme, to Charles Palmer’s effective direction with a few little flourishes such as Annalise stepping into the reflection of the moon – presumably in the same rain that was falling on it. There’s a visual reference to The Caves of Androzani, as a sickly-looking Doctor carries an unconscious Martha just like the fifth Doctor carried Peri, which for this fan symbolises the Doctor at his most heroic. It’s fast-paced, looks great and is very funny (‘compensation’).

It’s possible to spot the bits that don’t work as well – Trevor Laird seems to be doing something different than Adjoa Andoh, Gugu Mbatha-Raw and Freema Agyeman; the blue suit makes the Doctor look ordinary in the present day, and the extras are noticeably over-acting abominably in some sequences (the one clutching Morgenstern at the hospital window is astonishingly melodramatic), but these are so minor they barely register. It’s a superb series opener.

Next Time: The Shakespeare Code